What were the most-meaningful cultural influences of 2017? The Christ and Pop Culture 25 is a list of our favorite people, works of art, or cultural artifacts from the past year that we feel best represent God’s truth and grace in the world. The list is extremely weird, a meandering, whiplash-inducing product of the diverse perspectives of our writers. We wouldn’t have it any other way. The goal of our list is to illuminate and appreciate the good both in and outside of the church, to show the way God uses Christians to shine a light on the world and the ways God’s common grace spills out into the most surprising places. We’re counting down the list each day this week; here’s the final installment of the 25 of 2017.

Our final deliberations were recorded and produced into a two-part podcast in which you can hear exactly how the CAPC 25 Council determined the order and make-up of the 25 of 2017. Listen to the whole process via Part 1 and Part 2. 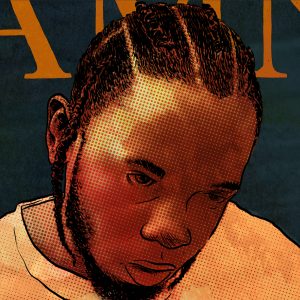 
“Narrates the ills of our times.”

If Kendrick Lamar were a biblical character, you could easily slot his lyrics in among the apocalyptic prophecies of the minor prophets. In dense, harrowing, thrilling verses, Kung Fu Kenny narrates the ills of our times—our structures are broken, our frames of perception are limiting, our salvation lies in our collectively ability to right the entire ship, to help even the smallest waving hand as the tides rise. How are the oppressed and disenfranchise able to find hope when their oppressors continue to tighten the screws?

Kendrick’s 2015 album, To Pimp a Butterfly, was ecstatic. In both the dark and light, the anger and the hopefulness, it exploded with cacophonous live instrumentation, choruses and chants that invited the listener to participate. It was, ostensibly, about the perseverance of faith. From track to track you can hear echoes of Galatians 6:9. DAMN. is the obverse, the wearying of doing good.

There are the bops and the bangers (“LOVE.” is one of the year’s most masterful pop tunes, and “DNA.” has all the attitude and amplitude of a stadium rock song), but it’s also the most bleak and inward-facing of Kendrick’s catalog. “FEAR.” moves from the fear of childhood abuse to a list of ways that Kendrick will “probably die”: at a party or simply walking down the wrong street, gunned down by gangs or beat down by police. The boundary between society’s pains and personal ones becomes porous—they’re all of a piece. Kendrick expresses the pain of being black in America in his distinct voice, a kind of fatalism that applies to the whole and is still felt individually. When Kendrick says, “Nobody praying for me,” he’s despairing not just corporately, but personally.

The album’s closing track, “DUCKWORTH.” provides a clear demarcation between DAMN. and the albums that came before it: “It was always me versus the world / until I found it’s me versus me.” In 2015, Kendrick spoke for the culture. In 2017, he speaks directly for himself. —Keegan Bradford 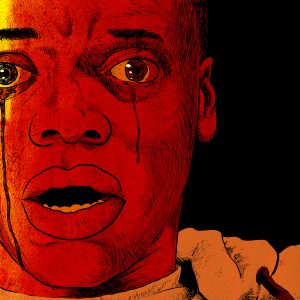 Get Out, directed by Jordan Peele


“It finds the right balance between laughs and searing social commentary.”

Written and directed by Jordan Peele (Comedy Central’s Key and Peele), Get Out is the story of Chris Washington (played wonderfully by Daniel Kaluuya) going to visit the family of his white girlfriend, Rose, for the first time, only to discover things are not as they seem with her family. It’s supposed to be a horror tinged comedy, but it also felt like an episode of the MTV documentary series, True Life, titled “Being Black in America.”

From white liberal racism, to the dynamics between the African American men and women, to the profiting off black talent without caring about black people, to the sense of danger when the flashing lights arrived in the final scene, Get Out succeeds because it finds the right balance between laughs and searing social commentary.

Beyond the phenomenal storytelling, Get Out brought “the sunken place” into the American lexicon and for that alone millions of Black Americans are grateful.

Get Out made us laugh, but like the all the best black comedians, Gregory, Pryor, Murphy, and Rock, Peele made us think about the harsh realities of racism and the psychological terror it inflicts on African Americans in this country. —Kathryn Freeman 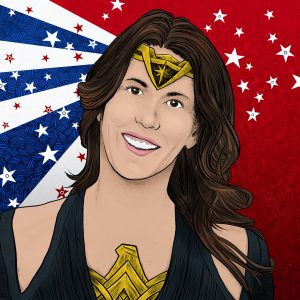 
“The story was not merely about a woman, it was told from a woman’s perspective.”

Wonder Woman was one of the most important films of 2017: it featured a powerful female lead, it proved that a female superhero movie could be wildly successful, and it showcased the talents of director Patty Jenkins. But while Wonder Woman holds special cultural significance in its own right, it’s Jenkins’s work, voice, and perseverance that have made such a significant mark on 2017.

Wonder Woman inspired and empowered women and girls, and a good amount of that power came from the crucial fact that the story was not merely about a woman, it was told from a woman’s perspective. Wonder Woman as a story has taken a myriad of forms—comics, TV, films—but the story is often objectifying or even belittling of its main character. With a woman in front of and behind the camera, the story not only became more compelling, it took on new meaning for the women who watched it.

Jenkins’s public presence after the release of the film was also a critical part of her cultural significance this year. After James Cameron made disparaging comments about the film, Jenkins responded with conviction and grace, by reinforcing the power of this idea: women’s perspectives matter. While responding to the substance of Cameron’s critique, she plainly acknowledged: “Though he is a great filmmaker, he is not a woman.”

While Gal Gadot’s performance was captivating and the film itself was especially moving for women who have yearned to see themselves represented in powerful roles, Patty Jenkins’s work reminds us that there is incredible power not only in the stories themselves, but in those who tell them. —Kaitlyn Schiess 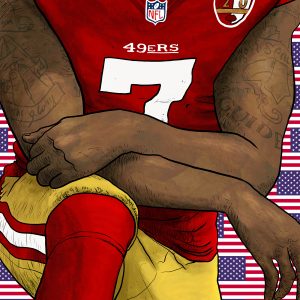 
“He simply knelt and let his actions speak for themselves.”

When Colin Kaepernick remained in his seat during the national anthem of his team’s third preseason game in 2016, no one anticipated this innocuous action would dominate sports headlines for well over a year. In 2017, his crusade took an unexpected turn. Following his pledge to continue protesting police brutality, the quarterback became the NFL’s most discussed topic without ever playing a down of football. Colin Kaepernick knelt in defiance of the richest, most powerful sports organization in the United States. And he won.

Historically, Kap doesn’t fit the profile of a sports activist. He doesn’t speak with the captivating bombast of Jack Johnson or Muhammed Ali. His afro and tattoos make him too edgy to embody the clean-cut images of a Jackie Robinson or Jesse Owens. He didn’t choose the biggest moment of his career to express his views like Tommie Smith and John Carlos. Kaepernick re-ignited a national conversation about justice without a clever hashtag, fancy ad campaign, book deal, or a dazzling personality. He simply knelt and let his actions speak for themselves. Those actions have included giving a million dollars of his personal money to dozens of documented causes and forcing the NFL to be accountable for how they address justice, leaving even his fiercest critics without much space to substantively critique his convictions.

Depending on whom you talk to, Colin has either ruined or purified the NFL. Yet, the most effective element of Kaepernick’s protest is just how small football looks in comparison to his cause. He is no longer defined by his involvement in the game he loves but by his sacrificial commitment to the people he loves. That example couldn’t have come at a better time. —Tyler Burns 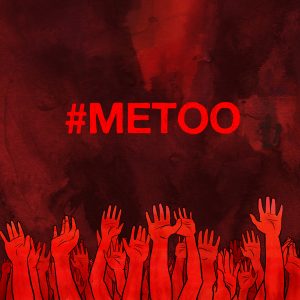 
“A movement that gave women the power to tell their own stories.”

Suggested by a friend: “If all the women who have been sexually harassed or assaulted wrote ‘Me too.’ As a status, we might give people a sense of the magnitude of the problem.”

That’s the content of the tweet fired off by Alyssa Milano on October 15 that would glean far more than a few thousands likes and retweets, and it would snowball into more than Tarana Burke, the originator of the “Me Too” campaign more than a decade ago, could ever hope or dream. #MeToo quickly became a movement that gave women the power to tell their own stories, and many chose to do just that.

#MeToo is important because movements are important, because the shift of power is important, because women are important. #MeToo could have been what many hashtags are: trending, passing, fading. Instead, we won’t see the ripples of #MeToo in 2018—we’ll see the swells of waves that are still being produced from this tide. Shows are being cancelled, elections are being swayed, and victims finally feel as if their stories aren’t being met with indifference and incredulity. The church isn’t immune to these accusations, nor are they immune to the healing taking place. People are listening. —Joy Beth Smith