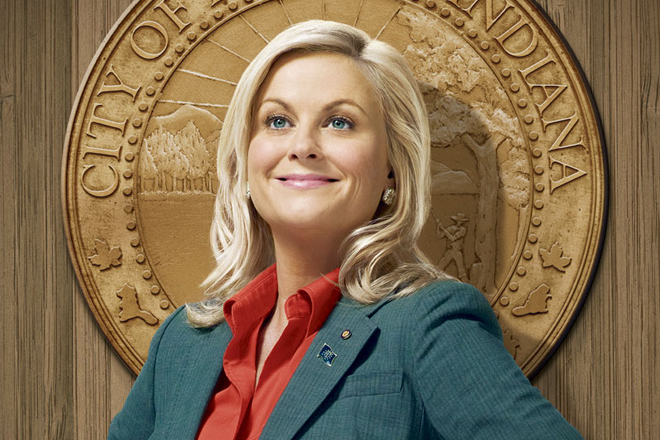 Every other Wednesday in Cool Takes, S. D. Kelly offers a fresh reflection on hot topics by exploring the intersection of faith with high and low culture.

As far as politicians go, Leslie Knope is a real winner. She exhibits non-stop optimism along with a belief that serving in government is a job that demands self-sacrifice and hard work. Her approach to her job as one of the City Councilors of Pawnee, Indiana helps undermine voters’ rampant cynicism about the motivations and efficacy of our elected politicians. The only quality Leslie Knope lacks is that of actually being a real person.

It’s a shame that Leslie Knope is a fiction; America sure could use her now. But in spite of existing only in the realm of fantasy, the character of Leslie Knope can still provide a balm of sorts. If you are a member of the electorate struggling in the morass of the very weird primary races, looking for a way to think about governance that transcends the confusion of the current political landscape, it might be a good idea to start watching — or watch again — Parks and Recreation.

I will look at my fellow citizens and see the best in them, in honor of all that is good, and in honor of Leslie Knope.

In these dark times, I’ve been taking the easy way out, experiencing a junior-sized version of the Benedict Option by retreating into my house and watching all seven seasons of Parks and Recreation. The Pawnee, Indiana parks department is also called “Parks and Rec”, “P & R”, or just “Tommy’s Place” — all nicknames given to the department by the character Tom Haverford (Aziz Ansari), who works alongside Leslie Knope (Amy Poehler). The show is populated with a cast of characters running counter to Leslie’s indomitable spirit, the most celebrated of which is Ron Swanson (Nick Offerman), a diehard Libertarian (the opposite of Leslie in every way in which it is possible to be) and Leslie’s boss and mentor for much of the show. The dynamic between Ron and Leslie provides the fulcrum on which the entire show is balanced. Their political and personal differences remain even as they demonstrate a deep regard for each other. Ron Swanson and Leslie Knope model a way forward to anyone who has ever found living and working alongside other human beings to be personally challenging.

If I’m referring to these people as if they are real, it is because they seem real, especially when you spend hours in their company for days at a time (seven seasons provides a lot of viewing hours). The characters in the show are real in the ways that matter in fiction, providing a great example of how to engage in friendship and civic life for the American people, their fellow citizens (so to speak).

The characters on Parks and Recreation demonstrate pluralism in a way that makes a person proud to be American, Lee Greenwood-style. The show features an ensemble cast with characters offering a range of political persuasions and ethnic backgrounds, yet this diversity manages to be entirely unselfconscious. Even when characters are clumsily navigating the intricacies of identity politics, there is no ill will involved. In a refreshing change from real life, good faith is assumed. The viewers might cringe listening to Leslie guess where Tom is “from”, as she puts it, but Tom doesn’t. He accepts Leslie’s cluelessness, even if when it takes her a painfully long time to realize that Tom is from America just like her, even if he isn’t white just like her. The fact that Tom is more irritated than aggrieved at this is because he recognizes that Leslie is pure of heart, that she is a good friend to him, even when — especially when — Tom is the one behaving badly, which he does. A lot.

The exchanges between Tom and Leslie are just one way in which the show repeatedly features our shared humanity — the ties that bind — instead of our glaring differences. This affirmation of the characters’ shared values (even while acknowledging their diverging ones) of loyalty, strength of character, optimism, and love takes place through straightforward storytelling, undiluted by the usual sitcom cynicism.

Another way in which the show provides a balm for these troubled times is in Leslie’s approach to local government and her community. Without getting into the details of the complicated issues surrounding community development and the economic stagnation in small towns and cities across America, it is safe to say that, for most 21st century Americans, investing in civic life is not a high priority. We will talk politics at a national level all day long, yet most of us would have trouble coming up with the names of the people charged with governing the communities in which we actually live.

Our first international critic of note, Alexis de Tocqueville, wrote of America in the 18th century:  “that vigorous democratic government and politics nourish and complement a participatory civil society.”

This sounds good, but when was the last time any of us engaged in a “participatory civil society”? To the 21st century Christian, the phrase participating in society might, after being run through the evangelical translator, sound like the equivalent of the biblical directive to love our neighbors. At what level this takes place in a more overtly political fashion is another matter altogether, but at the very least, the communities in which we live should feel like an extension of our family. Local encounters with our fellow citizens can, and should, feel like a version of the potentially awkward, coercive family holiday gathering where we encounter far-flung family members at the Thanksgiving table, the ones who make us cringe with their politics, but compel us to love them in spite of ourselves.

The characters populating Parks and Recreation embody this ideal, both in the way they love each other and the ways in which they serve their community, government-issued paychecks notwithstanding. I’m not proud of the fact that it takes a fictional comedy to remind me of the principles of good citizenship, but at this point I will take decency wherever I can find it.

All politics is local, so I’m going to (eventually) finish all seven seasons of Parks and Recreation and look up from my screen and get back out there again. I’m going to get out of my house and back into the belly of the beast, my community, where I will show up at the grocery store, and elementary school concerts, and the myriad other places that we all gather to size each other up and drive each other nuts. I will look at my fellow citizens and see the best in them, in honor of all that is good, and in honor of Leslie Knope, who is the hero America needs right now, even if she is not the hero America deserves.

S. D. Kelly lives with her family in coastal New England where she writes and works with a local nonprofit.
WWWTwitter