For each day of Twelvetide, Christ and Pop Culture writers will point to some of the cultural goodness that gives hope in the midst of life’s messyness. It’s our version of the “Twelve Days of Christmas” song, filled with things our writers have found to be life-giving. Some entries are 2018 artifacts, some are from years past. All of them point us to hope.

Man, the last twelve months were weird for sure, filled with personal challenges and change. I moved across time zones, found a new job and church in a new city, all while balancing chronic pain and stress. Meanwhile, the news cycle continued its devolution into perpetual chicanery dolled out from the highest levels of power in our society.

So it was, in this year filled with shifting ground beneath my own feet and cultural divisions chipping away at our fickle Republic, that at least when it came to television, I gravitated to the artifacts that paired well with couch snuggling and pizza nights. These are the binge-worthy shows, from Netflix and beyond, that made 2018 just a little better.

The Bluth family returned to Netflix for a fifth season this year, picking up immediately after the events of 2013’s much-maligned fourth season. Season five was, by all accounts, a return to an ensemble show, a course correction away from the conceit of season four’s experimental and fractured single-character-centric storytelling. But I’m here to go to bat for that 2013 misstep and tell you why now is the perfect time to revisit it.

Through clever editing and some brand new Ron Howard narration, Mitch Hurwitz (Arrested Development’s showrunner) reshuffled season four into a chronological, ensemble show in much the same vein as the original three seasons we all loved. The “new” season four now replaces the original in Netflix’s library.

I found that season four is funnier than I remember and bears a prophetic resemblance to our current cultural and political moment. You may recall the Bluths are a wealthy-by-appearances crew of shady real estate nepotists who license their name to prop up a crumbling façade of faux affluence and entitlement. A throughline of season four involves the elder Bluths concocting a get-rich scheme to build a wall between the United States and Mexico, while their daughter, Lindsey Bluth Fünke (Portia de Rossi), runs as a viable Republican candidate—despite her complete lack of political experience—by leading a campaign rally with chants of “PUT UP THIS WALL!” 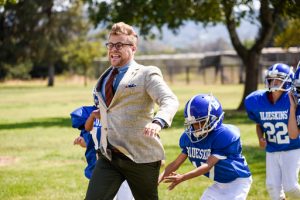 Adam Ruins Everything on Netflix

If I asked a computer to generate a television show by mashing up the fact-checking website Snopes.com with the know-it-all, cheery demeanor of The Good Place’s Janet, I may end up with something akin to real-life “investigative comedian” Adam Conover, host of TruTV’s Adam Ruins Everything.

Infectiously watchable and filled with just the right blend of education and humor, Adam Ruins Everything debunks widely-held misconceptions about everyday experiences and products. Conover has “ruined” everything from airport security to mattress stores.

Imagine discrediting a crazy step-aunt’s Facebook shenanigans, but in a way so smiley and quirky, she couldn’t possibly stay mad. That’s the stuff Adam Ruins Everything is made of, and in the era of “fake news” and “alternative facts,” it may be exactly what we need right now. 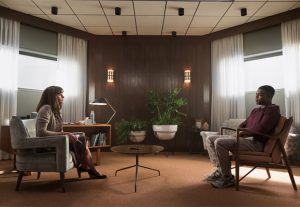 Adapted from the excellent Gimlet podcast drama of the same name, Amazon Prime’s Homecoming is an over-serious yet campy conspiracy thriller starring Julia Roberts as Heidi Bergman. Bergman treats war veterans suffering from posttraumatic stress at a mysterious facility called the “Homecoming Initiative.” As Heidi grows attached to one soldier under her care, Walter Cruz (played by the show’s breakout star, Stephan James), Heidi becomes increasingly suspicious of her employer’s true intentions and guilt-ridden over own.

Paranoia drips from every frame of Homecoming with a tone right at home in the cheesiest of airport novels. The genre suits Roberts’s decades-spanning repertoire perfectly. 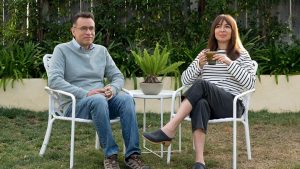 Forever takes marriage, boredom, and death, and makes them fodder for a genuinely earnest comedy. Created by Alan Yang (Master of None) and Matt Hubbard (Parks and Recreation), and starring Fred Armisen and Maya Rudolph, Forever is my go-to recommendation for best new show of 2018.

Part of Forever’s magic is its repeated subversion of expectations, veering left and right with each passing episode. The format forces a “sit back and enjoy” experience, hooking the viewer in ways I’ve rarely felt since the days of LOST (my favorite show ever). Don’t let that scare you, though—Forever is a lot more accessible than LOST ever was.

And if you’re curious enough to read more, I dedicated an entire article to it a couple months ago.

Did I mention I love it?

The Handmaid’s Tale on Hulu 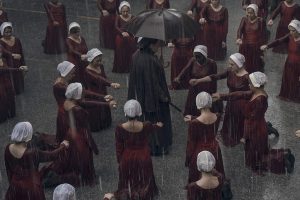 Here’s the one exception I’ll make to my aversion for dark, brooding dramas this year: Hulu’s The Handmaid’s Tale. It’s strange to tell people I “like” this show. It’s heavy (and I mean heavy) with enslavement, and sexual violence as key plot points. In the Republic of Gilead—a theocratic government installed by coup in the former United States—such evil is blessed as sacred under a Sharia-like populist civic religion masquerading as Christianity.

It’s no light stuff, and not usually something I’d watch. So what makes The Handmaid’s Tale different?

Well, for starters, under the creative direction of several female writers and directors, the show’s subject matter is handled with class, avoiding most hints of exploitation or voyeurism. Also, Elizabeth Moss and a supporting cast in Yvonne Strahovski, Samira Wiley, and Ann Dowd deliver riveting, nuanced performances as women navigating—and ultimately subverting—life in the Gilead hellscape. At its core, The Handmaid’s Tale is a story of hope in the face of persecution and death. A dark hope, but hope nonetheless. 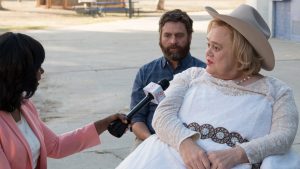 In FX’s Baskets, Zach Galifianakis stars as Chip Baskets, a hapless, Parisian-trained clown who finds menial, meager work as a rodeo clown in Bakersfield, California. The show employs Galifianakis’s unique shtick of dead-pan absurdism (think Between Two Ferns in a clown costume), surrounded by a crew of over-the-top cartoonish caricatures.

This is all right up my alley, and it’s why I started watching Baskets to begin with. But it’s not why I’ve kept watching it. No, it turns out the screwball gimmicks are the Trojan Horse containing this series’ true gem: Louie Anderson’s sublime performance as Chip’s mother, Christine.

Anderson says Christine is a heartfelt tribute to his mother, and it shows. There’s no mockery here. No Mrs. Doubtfire shenanigans or Monty-Python-in-drag falsetto. In each passing episode, Anderson shrinks from the screen until only Christine is left. Anderson IS Christine. And she is one of the most interesting and endearing television characters I’ve seen in recent memory. That makes Baskets one of the best things on TV right now. 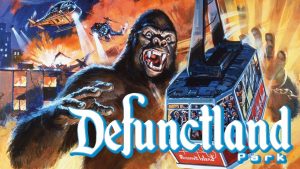 I’m going to cheat a little and recommend my favorite YouTube genre from the last year: video essays chronicling the history of amusement parks and attractions. (Hey, it counts. All our TVs have the YouTube app now, right?)

No one does these videos better than Defunctland, Yesterworld, and Park Ride History. Think of them as a poor man’s Modern Marvels show about theme parks.

Most people I know foster a love-hate relationship with places like Disney World or Universal Studios. To the extent that many of us enjoy these parks, that enjoyment is often in spite of their reputation as garish tourist traps and beacons of American excess. Yet these YouTube channels bring an appreciation for the artistry of themed entertainment while chronicling its rich history of successes and failures.

At their core, theme park attractions promise other-worldly experiences through an inter-connected weave of ride systems, projections, sound design, illusions, and animatronics. As these videos show, that effort often falls flat. But when all goes to plan, the ride pulls off this feat a few thousand times every day—without breaking down—with a shelf life measured in decades. If that boggles your mind and piques your interests as much as mine, then give these YouTube channels a try. 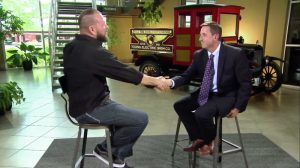 Last summer, Liz and Matt Bruenig, hosts of The Bruenigs podcast, dedicated an entire episode to what they called “the greatest show in 21st century television”: CBS’s Undercover Boss. Now in its ninth season, I think we’re all semi-aware of the premise: a high-ranking corporate executive of a well-known company slips undercover to join the rank-and-file frontline workforce of her enterprise, supposedly to see how things really operate in the company.

And while she may catch shady dealings on camera, the hook of Undercover Boss is the executive making emotional, seemingly life-changing connections with a few exemplary employees. She gains an appreciation for their hard work, their skill, and harsh living conditions, and then ends the episode by rewarding those individuals.

But dig deep a little deeper, the Bruenigs argued, and just under the surface of Undercover Boss lingers a sobering look at the disparities between upper and lower classes. Viewed with this lens in 2018, a time when a growing economy has yet to translate to livable wages for a large class of Americans, Undercover Boss reveals an unseemly side of our society that few mainstream shows ever touch. 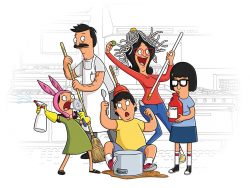 I don’t think I enjoyed any show this year more than Fox’s Bob’s Burgers. It was therapy via laughter in a year when I desperately needed it.

Bob Belcher (H. Jon Benjamin) and his family own a small, struggling burger dive near a seaside boardwalk. Barely scraping by and unable to pay any employees, Bob and his wife Linda (John Roberts) manage the restaurant, while their eccentric, irreverent kids, Tina, Gene, and Louise (voiced by Dan Mintz, Eugene Mirman, and Kirsten Schaal, respectively) make up the staff.

Admittedly, each Bob’s Burgers episode pivots on little more than goofy sitcom scenarios. But I can’t shake my love for the Belcher family and their love for one another.

In 2018, Netflix (and others) delivered an ever-increasing dilemma of choice with literally thousands of streaming shows vying for our attention. Over the coming year, that choice will expand to the very means of distribution as new platforms with original content claw for their own slice of our monthly subscription fees. It’s a strange, new streaming world out there with some truly great diamonds in the rough. For small screen lovers everywhere, here’s hoping this ninth day of Christmas brings you joy, peace, and great TV.

The Gospel Comes with a House Key by Rosaria Butterfield, Free for CAPC Members

Butterfield isn’t proposing hospitality without personal boundaries, but hospitality that is open to having those boundaries widened for the sake of the gospel.

Just Mercy Calls Us to Be the Family of God

#OKBoomer and Generational Warfare in Succession

Seeing and Believing 237 | The Top Ten Films of the Decade

The CaPC 25 for January 2020 | Caucuses, Kobe, and Conversations