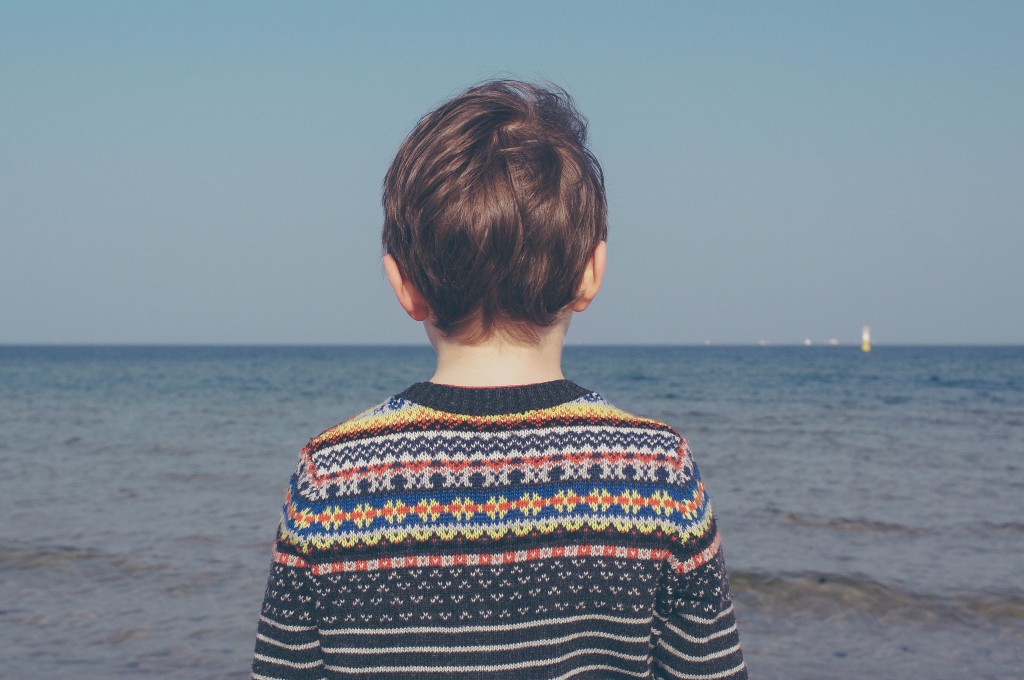 It is Halloween night, and I’m nine hours away from home, visiting family. I have selected a cheaply manufactured Ninja Turtles costume that I pretend my three-year-old son, Declan, cares about. He does not. Our nightly routine, which we typically follow with a fierce religiousness, has fallen by the wayside. I convince myself it doesn’t matter—kids visit grandparents all the time. They dress up and trick or treat. Why shouldn’t he?

I bribe him into the costume. I take him into the back room and pretend to lay down the law—but really, I just slip him a few M&M’s and force the thing on over his manifold sweaters. We pile into the car and drive to what my husband promises is the coolest neighborhood on the block. And it is. Each house is more elaborately decorated than the last. Music blares from what sounds like a hundred different speakers. Orange and red lights refract through thick fog. The swelling crowd chatters with sugar-induced excitement.

God does not merely sculpt ideas of people; He knits together creatures made in His image and endows them with the full weight of humanity.

But not Declan. He is immediately and visibly overwhelmed. He descends into a speechless state, giving small whimpers instead of trick-or-treats, feral growls instead of thank yous.

I push on. We climb a flight of steps to an overflowing bowl of “the good candy.” He devolves into blood curdling shrieks. I peel his rigid body from the ground and make to carry him back to the sidewalk, where a queue of costumed children waits. With sudden urgency, he attempts to throw himself down the concrete steps. I narrowly catch him. I hear the gasp before I see her face—a bewildered woman clutching her child at the bottom of the steps. Her hand covers her mouth, which is frozen in shock.

Her eyes scream the word I have denied for months—autism.

Months later, when my husband and I sit in an evaluation room, I recall countless symptoms that should have tipped us off—but none of them were the things that made me see it. I didn’t see Declan’s autism in his compulsive routines or repetitive behaviors, or even in his inability to appropriately relate to peers. I saw it in the dumbfounded eyes of a stranger on Halloween, in the look that said “something about him isn’t right.”

There’s a funny thing that happens when you’re declared clinically infertile at the same time your son is diagnosed with autism: People assume the two things are related. Of course, I don’t walk around telling people I’m infertile, so there’s naturally room to wonder.

How are you doing?

It’s a tempting exchange, but one I’ve thus far avoided. Instead, I endure the sly questions: “So when can we expect another one?!” I listen helplessly as they turn into pitying declarations: “I don’t blame you—he’s enough on his own to handle.” The a-word lurks between the lines, sometimes louder than others, but always there.

Occasionally, someone will come right out and ask: “Is it because you’re afraid of having another one like Declan?”

Nope. It’s because my reproductive organs are ripe with defection.

I try not to take this question personally—something that is particularly hard during October, which happens to be National Pregnancy and Infant Loss Awareness Month. In a sense, I’ve fed into the attitude that supports it. From the time Declan was born, we rated him in accordance with the ways he affected our lives. If he slept (which he didn’t) he was a “good” baby. If he shrieked for hours (which he did), he was a “tough” baby. It’s an uncomfortable but socially pervasive truth: In at least some capacity, children are accessories to adult lives. They are valued if welcomed and inconvenient if not, but scarcely perceived with the simple dignity intrinsic to their humanity.

It’s a tricky thing I had no real reason to consider before my inability to procreate coincided with my son’s incurable developmental disorder. As my doctor told me during early pregnancy, “There’s no return policy once they’re out of the womb.” It’s a high stakes decision, knowing you could potentially be held hostage by a special needs child for the duration of your life.

And yet, I’d take another child like Declan in a heartbeat.

There is something unnerving about weighing the pros and cons of a theoretical child that closely resembles the one you already have. His humanity intrudes on the conversation in inconvenient ways, and you become distinctly aware that there’s really no such thing as a “theoretical” human being. God does not merely sculpt ideas of people; He knits together creatures made in His image and endows them with the full weight of humanity. I have seen the gaps humanity fills. I have seen the image of God wrought upon inconvenient children. I have seen it re-frame still shots of panic-inducing symptoms until they move and breathe with light and color.

I have also seen Declan’s autism in the eyes of strangers, and it is a terrible thing to behold. Every now and then, I’ll catch a glimpse in the faces of onlookers at the grocery store or in the pitying glances of acquaintances. And maybe that boy is not worthwhile. Maybe I can’t parent him. But that boy also isn’t real. He is the distorted image rendered by a funhouse mirror—a quivering shadow on the wall of a cave.

I had one conversation about autism between that Halloween night and November 2, 2015, when I asked Declan’s doctor to arrange an evaluation. It was with a speech-language pathologist friend who has acted as a tireless resource as we’ve navigated Declan’s disability. She didn’t opine on whether or not Declan had autism—I wasn’t ready for her to. She did, though, remind me of the distinction between a label and a person. “It’s hard to put kids in a diagnostic box,” she told me. And she was right, of course: children with disabilities aren’t incarnations of clinically identified symptoms—they are human beings.

The conversation was short, conducted via Facebook messages, but it shifted my gaze from the cold cave wall to the boy casting shadows on it. The shadow is an amalgam of violent fits and flapping hands—inflexible routines and life-long special needs. The boy who casts it is a bird with trembling wings. He is a poem we’ve transcribed as a script. He bears the full weight of God’s glorious image.

I can’t say with any certainty whether there is merit to withholding a life wrought with special needs. It’s an untidy conundrum my husband and I will likely never really need to parse—we make lofty declarations, but we make them knowing it’s unlikely anyone will call our bluff. In that capacity, I can’t really know the struggle other parents and prospective parents go through.

I can, though, tell you that human beings are more than the footprints they cast on earth. I can tell you that the special needs child you imagine in a clinic chair is just an echo of a song—muffled strains overheard from the concert’s antechamber. I can tell you that Declan is not the horrified expressions he sometimes conjures. His measure is not taken by the hours and hours of therapy he requires, or in whether or not he’ll need supports forever. He was and is no less (but certainly more) than a little boy who compulsively demands to look at the moon, and when he sees it, whispers, “God made that.”