When I was in middle school, some of my friends vacationed to New York City with their families. Upon return, they obsessed over one unbelievable detail: everyone walked around with iPod headphones in their ears. This was before smartphones, when the most technologically advanced cell phone a teenage girl could beg her parents for was a hot pink Motorola Razr. Every time I thought of iPod-covered New York, I pictured a zombified dystopia with millions of people wandering in business suits, numb to the world around them. Why would anyone want to listen to music by themselves?

In the same way that Crouch urges us to push technology to the edge of our home lives (without kicking it out the door completely), perhaps we would benefit from finding ways to push technology toward the edge of our worship lives as well.Five years later, I became one of those people stuffing little white buds into my ears while I walked around Manhattan as a college freshman. By then, not only could I listen to music, but I could also check my email, look up directions, make dinner plans, read the news, check social media updates, and a lot more. In a pocket-sized hunk of metal, I found sufficient distraction from a New York I didn’t realize existed when I was 13. At last I knew what those city slickers were trying to ignore—persistent sirens and car horns; an endless barrage of advertisements, petition-pushers, and panhandlers; a drunk man defecating in the street.

In the past six years since, I’ve earned a degree in Media, Culture, and the Arts and become a communications director at a church in Brooklyn. I’ve spent my brief professional career building social media pages, producing podcasts, and executing marketing plans for various nonprofits. I’m also engaged to a handsome, monkish man who uses a flip phone which was not enabled to send text messages until a few months ago (when I begged for a more convenient way to communicate with him). So when I read Andy Crouch’s The Tech-Wise Family: Everyday Steps for Putting Technology in Its Proper Place, my interest was piqued. 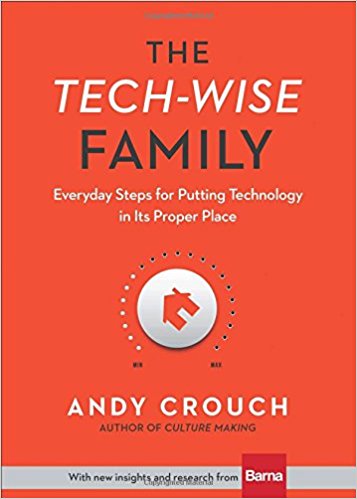 I’ve become an adult parallel to the growth of smartphones, the internet, and social media. Indeed, my livelihood is dependent on my ability to understand these technologies and use them well. There’s no doubt that new technologies have made life easier, more efficient, and even more enjoyable sometimes. But we all know people (and we’ve all been that person) who cannot put down a cell phone long enough to have a dinner conversation or who finds self-worth in the tally of Likes on a Facebook profile picture, mistaking virtual connection for meaningful relationship.

In The Tech-Wise Family, Crouch not only highlights these positives and negatives, but he also provides a fresh articulation of how the nature of technology can be in conflict with the purpose and intention of home, family, and community to raise well-formed individuals. “Technology is a brilliant expression of human capacity,” he writes. “But anything that offers ease everywhere does nothing (well, almost nothing) to actually form human capacities” (66).

The fundamental problem with all our new gadgets, according to Crouch, is that they come “with a powerful set of nudges” that discourages us from cultivating important disciplines, virtues, and imaginations, and they keep us ever more dependent on technology alone. Why cook when you can order delivery? Why read the book when you can watch the movie? Why garden when you can go to the grocery store? With all the convenience of our technologically advanced lives, it’s easy to forget that there is often deeper value in less convenient routes to livelihood. In these cases, the latter scenarios will almost never develop our skills and character with the same certitude as the former.

Furthermore, persons (especially children and teenagers) who spend large amounts of time on their phones or social media are more likely to be depressed, anxious, suicidal, and experience feelings of loneliness. “Eighth-graders who are heavy users of social media increase their risk of depression by 27 percent, while those who play sports, go to religious services, or even do homework more than the average teen cut their risk significantly,” psychologist Jean M. Twenge writes in The Atlantic. Twenge regularly interviews teens who say that they spend more time alone in their room looking at their phones than they do with friends or family.

In light of all this, Crouch outlines practical ways (“ten tech-wise commitments”) to avoid enslaving ourselves to our gizmos (without becoming Amish and ditching them altogether). These include: “Car time is conversation time” and “One hour a day, one day a week, and one week a year, we turn off our devices and worship, feast, play, and rest together.” A more comprehensive list of the ten commitments can be found here, and some of these rules may seem arbitrary, but their significance is illuminated through their common goal: Members of a tech-wise family strive to keep technology at the edge of their life together instead of at the center.

Our ever-advancing devices are powerful, and it’s easy to get lost in them. I probably watch too much Netflix. It’s so easy to cue up a sitcom in the background while I’m doing the dishes. My phone is my alarm, so a screen is the first thing I see when I wake each day. My unread emails are only two clicks away every morning. In addition, my job is not possible without technology. Indeed, the U.S. Bureau of Labor Statistics anticipates significant continued growth in IT-related fields over the coming decade.

Part of my job is to communicate information about my church to the congregation almost exclusively through technology. While reading Crouch’s book, I realized that our sacred spaces are just as susceptible to a technological takeover as our homes. In my small church, our primary platform for event announcements is an e-mail newsletter. We’ve ditched hymnals and paper programs for projector screens. We are trying to alert our neighborhood about our church through blogging, online advertising, podcasts, and social media. Almost every part of a Sunday worship service has technology at its center. And so I’ve started to wonder: what does it look like to be a tech-wise church? How do we keep technology from ruling our sacred spaces?

There are plenty of churches that are more tech-savvy than mine; we’ve never been #blessed with a multi-billion-dollar budget or a smoke machine. But I’ve attended several megachurches with such budgets, in New York and Europe. On one occasion, in Paris, I was at a congregation of several thousand people when the room went pitch black and the only thing visible was the massive television screen above the stage. For two and a half minutes we all watched what could only be described as a professionally produced commercial that made youth camp look more appealing than a Caribbean vacation.

When I said to a friend that I thought commercializing youth camp in this way was inappropriate, she responded, “Why? This church is just being a good steward of the skills, talents, and materials they’ve been given and produced a well-made video.” Touché. But shouldn’t our churches (as well as our homes) be distinguishable from commercials, concerts, and movie theatres? If commercials are the way we aim to keep teenagers interested in church, what makes us think they will not discard church in the same way they discard old gadgets when they see commercials for new ones?

Not only that, but every announcement at this church was in the form of a commercial. And every worship song was smothered with lights and smoke machines. And there was not a moment during the service when the congregation was not looking at a screen. The music was fun and well-produced, and the videos were great, but I’m inclined to assume that centering technology in our church liturgy is not going to form our human capacities for worship any more than ordering delivery will form our capacities to cook.

In keeping with Crouch’s guiding principles, how do we use the technology well in our churches without letting it keep our attention away from the most important elements of church? Perhaps we could find more ways to focus on human connection instead of (or in addition to) tech-laden advertisements. Maybe someone could approach lonely teens after church and invite them to youth camp in person. Or we could incorporate more moments of silence into our liturgies. Blasting “Be Still and Know” through dozens of amplifiers could be spiritually uplifting. But the deep power of still silence with God could resonate more if we (even for a minute) unplug the electric guitars, pause the strobe lights, turn off the projector screen, and sit silently in a house of worship.

Crouch’s argument recalls to mind the sublime magnificence of the world. I spend so much time distracted from profound and tangible beauty because I’m lulled into complacency by a computer screen, social media, or television. With new curiosity, I’ve given up my headphones and my email during my daily commute. Alert to my surroundings, I started to notice a New York I’ve been missing all this time: a little boy dressed as Superman charging down the street with his mom running and singing a theme song behind him; a man walking seven dogs while producing a most melodic and pacifying Gregorian chant; an elderly couple sweetly smooching on a park bench.

What might we find if we keep our technologies rightly ordered in our homes and churches? In many cases, Crouch reminds, wondrous evidence of God himself.

Rebecca Calhoun has a B.A. in Media, Culture, and the Arts from The King's College. She lives, works, and writes in New York City.

12 Ways Your Phone Is Changing You by Tony Reinke, Free for CAPC Members

In 12 Ways Your Phone Is Changing You, Tony Reinke presents the pitfalls of smartphone use and suggests a practical way forward.