The Good Book Company is hosting a five-book giveaway of Being the Bad Guys by Stephen McAlpine for Christ and Pop Culture members!

Sometimes when I scroll through Twitter, I land in the middle of some thread that has all the telltale signs of outrage and uproar. I backup through the entries to see the inciting incident, to see who said what to whom. And to see if someone is getting cancelled because of it. As a natural diplomat, such conflict sets my heart racing. But I also have a strong defense system that rages if the scales of power and influence cause harm. (It seems that my emotional makeup gets plenty of exercise these days.) Sometimes the culprit of the social flurry is a usual suspect—some smarmy political or callous thought leader. Sometimes it’s an unexpected foe with ties closer to home… sometimes it’s someone who camps under the Christian tent. Then I’m left wondering how anyone would want to move closer to the Savior when Christians so often play the bad guy.

The world doesn’t have to look far to find fault with any who claim the name of Jesus.

I will admit that it would be a bust if any of us pointed to our own track records to draw people to Jesus. The bad guy isn’t out there, but right here, inside each of us. The world doesn’t have to look far to find fault with any who claim the name of Jesus. Stephen McAlpine speaks to this reality in his book Being the Bad Guys: How to Live for Jesus in a World That Says You Shouldn’t (The Good Book Company):

That’s rather discouraging. Does anyone really want to be the bad guy? One common reaction when finding yourself in this role is to build a defense against it. You might be tempted to make a list of reasons why your faults are of the common human variety. If you’ve tried this, you know it isn’t the best approach. McAlpine offers us another way:

Throughout the book, McAlpine explores the current situation (Part One: How Did We Get to Be the Bad Guy?), defines the problem (Part Two: What Does Being the Bad Guy Look Like?), and then offers a way forward (Part Three: Being the Best Bad Guy You Can Be). His insight clears the dust caused by all those dustups so we can follow the way of Christ. Chasing after the approval of others, as tempting as that may be, is futile. McAlpine gives us the courage to admit our weaknesses so we can boast all the more of our Savior’s love. 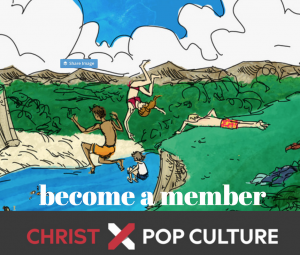 For a chance to win a copy of Stephen McAlpine’s Being the Bad Guys, become a member of Christ and Pop Culture by February 14 for as little as $5 per month. You’ll get free stuff each month, full access to our digital Christ and Pop Culture Magazine (including all back issues), entrance to our exclusive members-only group on Facebook—and you’ll help us keep the lights on. Join now.