Spend any time in the evangelical sphere and you’re bound to come across Dave Ramsey and his faith-based financial self-help products. Ramsey’s bestselling books The Total Money Makeover and Financial Peace line the shelves of Christian bookstores. Thousands of churches teach his nine-week Financial Peace University curriculum. For $129.99, the course promises nothing short of life transformation in the form of good money habits.

For decades now, Dave Ramsey has unfurled his financial advice through a Tennessean drawl dripping with folksy truisms lined with a heavy dose of Bible verses. Ramsey refers to his method as “God and grandma’s way to manage money” and caps it all with an inspiring personal narrative about clawing his way from bankruptcy to millions by using the financial principles he teaches. 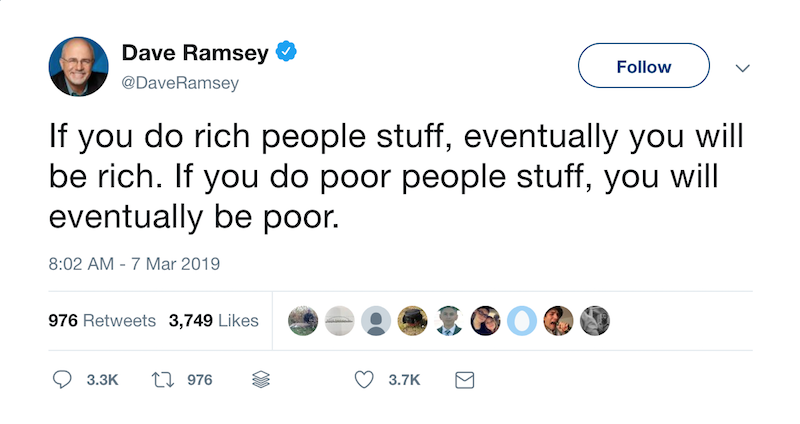 By my count, the average Dave Ramsey tweet may provoke 50 replies on a good day. This one garnered over 3,300 with almost 1,000 retweets.

Watching the commentary unfold—some of it angry, much of it hilarious—it’s clear something hit a nerve here. But what was it? Of all the tweets, why did this one blow up the way it did?

Do what rich people do” is as classic a Ramsey-ism as they come. In fact, anyone who counts themselves among the scores of church folk who attend Ramsey’s classes (or go to his live events, or read his books, or tune in daily to The Dave Ramsey Show) probably observed this ordeal with confusion and bewilderment. This is, after all, the kind of thing Dave Ramsey says all the time.

“I have found that if you look into the lives of the kind of people you want to be like, you will find common themes,” Ramsey wrote in his book The Total Money Makeover. “If you want to be skinny, study skinny people, and if you want to be rich, do what lots of rich people do.”

Some (but not all) of this social media storm can be explained as the nature of online discourse in 2019. Tweets land with a punch that makes communicating with nuance or charity practically impossible. As a medium, Twitter thrives on hot takes and snark. The thrill of dunking on a low hoop is too tempting. “Do rich people stuff,” you say? You mean cheat my way into college, Dave? Or commit tax fraud? Nice one, Dave.

But certainly there’s a more charitable way of looking at the world, one which presumes the most reasonable intention in a person’s words. All of us could say a version of what Ramsey said in a way most people would agree with. If your bad habits got you into financial ruin, those bad habits won’t get you out.

The problem is, even with the best of intentions, Ramsey’s sentiments about wealth disparity is an a oversimplification bordering on cruelty. When someone spends years responding to life’s complications with platitudes and proverbs, they tend to think of these teachings as absolutes over time. Particularly when someone has climbed from a state of poverty to one of financial wellness, it’s simple to tell the narrative of the struggles and personal achievement that got us to where we are. By extension, it’s easy to render judgment on those who didn’t do the same.

Hiding behind Ramsey’s statement is a subtle, unspoken moral declaration that wealth comes from good behavior and poverty comes from bad, and both financial conditions are the result of one’s character.

Boiled down to its most basic form, this is karma by another name. It’s the bad advice of Job’s friends personified in 21st century American terms. Good people get good things. Bad people get bad.

During the roaring Bush years of variable rates and McMansions, Dave Ramsey was a lone voice among financial celebrities who took a hard line against debt. Then, in the immediate aftermath of the 2008 Recession, as the country was still reeling from financial ruin, Ramsey appeared as something of a prophet. It was common sense then to look around and conclude debt is indeed very bad.

Now here we are, a decade later, and avoiding debt is still good advice. Debt accrual—especially in America—is often rooted in covetousness and jealousy. Scripture tells us such things are bad for one’s psyche, soul, and well-being. In more explicit terms, they’re sinful.

But there’s a component of the Dave Ramsey wisdom which hasn’t aged so well in our  post-Recession world, where the gap between rich and poor grows with each passing year. Unemployment steadily declines yet wages remain stagnant. College and healthcare costs have reached insane, unsustainable proportions. Housing prices are skyrocketing. In metro areas particularly, gentrification and rent increases have pushed the most vulnerable out of their neighborhoods into poor housing conditions. In extreme cases, it’s led to outright homelessness.

Meanwhile the nation’s wealth is concentrated into a smaller percentage of people than at any other point in our lifetimes.

We’re talking here of forces beyond most of our control. It’s here where the Dave Ramsey directive to “do rich people stuff,” is not just difficult for many. It’s borderline impossible.

Worse still, hiding behind Ramsey’s statement is a subtle, unspoken moral declaration that wealth comes from good behavior and poverty comes from bad, and both financial conditions are the result of one’s character, regardless of the external structures at work against them.

Interestingly, and much to Dave Ramsey’s credit, his worldview holds a somewhat healthy category for bad actors in the American economy. He rails against debt collectors. “You know they are lying if their mouths are moving,” he frequently says. He holds similar contempt for certain lenders, insurance agents, and merchants, with much of his advice hinging on how to avoid being scammed by such people.

Yet the Ramsey plan does little more than acknowledge that such forces exist without giving much consideration to the sinful nature of man and why these forces exist: to pursue riches. Riches breed exploitation birthed from the unique temptations of wealth: greed, jealousy, and pride. Being rich doesn’t preclude these sins, but it’s certainly a hindrance to avoiding them.

The Lord tells us that money is not a morally neutral construct. “Truly, I say to you, only with difficulty will a rich person enter the kingdom of heaven,” he said. And knowing that many would try to explain away the conundrum of this teaching, Christ repeated himself more emphatically: “Again I tell you, it is easier for a camel to go through the eye of a needle than for a rich person to enter the kingdom of God.”

Elsewhere Jesus tells us, “Blessed are you who are poor, for yours is the kingdom of God.”

The calculus of the Kingdom warns the rich. It blesses the poor.

Dave Ramsey’s teachings aren’t all bad. In fact, they’re not even mostly bad. The program has a lot of good, solid advice to dish out, particularly about taking financial responsibility insofar as it’s within our ability to be responsible. It may even be true that “If you do poor people stuff, you will eventually be poor.”

But when it comes to the way of Christ, there are worse things than being poor.

Matt Poppe writes from sunny Phoenix, Arizona, where he lives with his wife and their three sons. He studied journalism at UMass Amherst.
Twitter