Brian Jones’s Finding Favor is graciously available free to Christ and Pop Culture members until October 5, 2018, through our partnership with InterVarsity Press.

There are plenty of things to love about America’s anything-is-possible mentality. Opportunities abound here for the fullest measure of life, liberty, and the pursuit of happiness. I don’t know who started the #blessed movement, but it is pervasive here. We are a people looking for the best life now.

And I’m not talking about people who don’t claim the Christian faith. Within the body of believers, the #blessed pursuit gets a holy wrapper. We pray in faith, trusting that God has the best life now for those who are obeying the best. Such faith gymnastics has twisted the very real biblical concept of God’s favor into a knotted mess health and wealth and spiritual phenomenon sideshows.

Jones helps us think rightly about the intersection of faith and blessing, setting straight some of the tainted notions we have picked up from the world at large.

This is exactly why we need books like Finding Favor: God’s Blessings beyond Health, Wealth, and Happiness by Brian Jones from InterVarsity Press. Jones helps us think rightly about the intersection of faith and blessing, setting straight some of the tainted notions we have picked up from the world at large. Employing great story-telling and personal anecdotes, Jones details the “unexpected ways God blesses people with his favor.” (22)

One of those unexpected ways is through something Jones calls “Involuntary Perseverance,” which is also the title of chapter two. It’s the needed opening punch to our problematic health/wealth gospel. Just because we are the beloved of God doesn’t mean we will live on Easy Street:

“This shocks many of us. Closed doors are the last thing we thought we would receive when we prayed for God’s favor. ‘I thought I was going to be blessed,’ we say, not realizing that God limiting our options can be one of his greatest blessings of all.” (24)

In chapter three, “Holy Discontent,” Jones calls us to reflect upon the places in our lives where we’ve grown numb and rooted, wishing for God’s divine intervention instead of using our agency to make needed changes:

“We’ve grown content. But not content in the sense that we’ve assessed where we are and decided that we’re not going to change because we’re going to focus on other priorities.

“I mean we’ve simply stopped caring. We’ve resigned ourselves to the fact that this is the mess we find ourselves in and can’t muster the motivation to find a way out.

“I’m not describing depression, though depression will sometimes mask the condition at hand. I’m talking about spiritual lethargy.

“I’m talking about an unhealthy acceptance of a situation, relationship, or mindset that we know (and God knows) needs to change, but we simply won’t.” (46)

Jones introduces the concept of “Redemptive Poverty” in chapter eight, hitting at the heart of the #blessed mentality. “As Americans living in a twenty-first-century, consumer-driven capitalistic culture, it is hard for us to imagine how being forced to live with less could a sign of God’s favor, but there are two truths I want you to consider” (131):

Finding Favor also speaks to other prickly realities, such as obscurity, affliction, and failure. The topics may be daunting, but Jones’s relatable style makes this medicine go down a bit easier. It’s a timely and needed correction our hearts need, whether we know it or not. 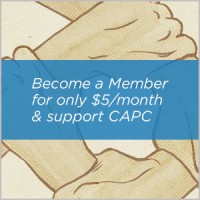 To receive a digital copy of Brian Jones’s Finding Favor, consider becoming a member of Christ and Pop Culture for as little as $5 per month. You’ll get free stuff each month, full access to our digital Christ and Pop Culture Magazine (including all back issues), entrance to our exclusive members-only group on Facebook—and you’ll help us keep the lights on. Join now.

One by One by Gina Dalfonzo, Free Promo Pack for CAPC Members