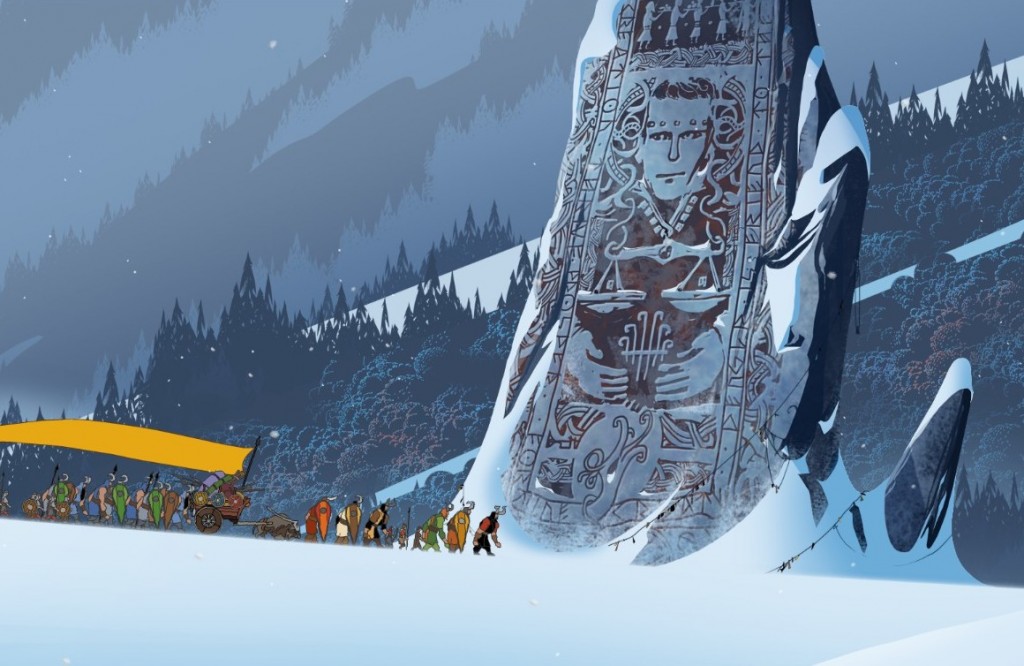 The post-apocalypse has long been fascinating, regardless of the medium in which it’s envisioned. Whether it’s morbid curiosity, an element of wish-fulfillment, or simply humanity’s desire to ponder its own mortality, something about global destruction seems to appeal to creators and consumers of culture on a primal level.  In recent years, especially, depictions of a post-civilization world have abounded in literature, film, television, and video games—a trend that some critics have attributed to a growing pessimism in our age. While modern accounts of Armageddon tend to rely on a futuristic setting to spin their tales of calamity, however, it is worth noting that the first stories of the apocalypse actually come from ancient mythology.

The absence of a divine presence contributes to a greater sense of loss that permeates the entire game.

Such ancient apocalyptic mythology is clearly where The Banner Saga, Stoic Studio’s beautiful 2014 RPG, takes its inspiration.  Though the game’s fantasy world makes use of no real-world historical mythos, its enchanting art, music, and lore are clearly inspired by Nordic culture and its stories of Ragnarok.  More interesting than what is there, however, is what is not: There is a God-shaped hole in The Banner Saga, a sublime nostalgia for some god—any god—who will give hope and direction back to a broken world.

Unfortunately, no gods remain in The Banner Saga’s fantasy realm to provide this sorely-needed assistance.  The gods die before the game even begins; their godstone shrines remain scattered about the landscape, but that is all they are—landscape, part of the scenery, stopping points in the journey of the player’s caravans as they run headlong from the unstoppable dredge, a horde of golem-like monsters that have returned from out of the North.  Players may, if they wish, examine the shrines to learn the stories of the now-deceased gods, but doing so only underscores the fact that they are gone.  The player learns only the barest hints about the way they died (The Banner Saga is, after all, meant to be a three-part series, the second of which is due to come out sometime this year).  But the important point is that the gods are rather permanently—albeit mysteriously—absent.

This absence of a divine presence contributes to a greater sense of emptiness and loss that permeates the entire game.  Throughout The Banner Saga, players spend most of their time directing a war-caravan through cold desolate wastes, stopping only to fight off the threats that encroach on every side.  While the caravan is traveling, the game’s camera zooms far out, leaving the player’s entire party dwarfed against the vast, empty landscape.  Even an army of hundreds of giants can barely be seen against the silent mountains and cliffs that dominate the horizon.  It is a breathtaking world, but it is also barren, desolate—an emptiness that swallows supplies and comrades as the player progresses.  Meanwhile, the player—even the player’s entire society—is alone and very small in the greater frame of the world.  Only when your caravan approaches the occasional town or godstone does the camera zoom in, rendering your tiny troop suddenly distinguishable and affording your men and women a brief respite against the unrelenting emptiness.  Yet the godstones simply emphasize that there is no lasting refuge here—the gods, they insistently remind you, won’t help.

Loss and absence mark not only the game’s setting, but also its story and lore. Against its backdrop of cracked mountains, decimated cities, and lost comrades, The Banner Saga’s narrative pivots between two perspectives—that of a rag-tag band of human refugees, and that of a massive war-caravan of varls, fierce yet honorable giants allied with the humans.  The varls are essentially old-school Vikings—they drink, they swear, and they fight furiously.  Their race is fierce and honorable, but ultimately doomed; the death of the gods means the varls are dying off as well, unable to replenish their numbers as they fall in battle, leaving only their works behind.  The multiplying humans, on the other hand, are petty, selfish, and emotional—so much less than their old-world counterparts.  Humans, in fact, are often as great a threat to the player as the dredge, as the player’s caravan suffers from attacks by brigands, political infighting, and traitors in its own midst.  And in contrast to the firm goals and directions that define the varls, the humans are simply running headlong, fighting to survive.

And that, in the end, is the player’s overarching goal: merely to survive.  As The Banner Saga progresses, the varls’ war turns into a glorious last stand, which itself falls apart as giants join the humans in fleeing from a threat they cannot hope to face, with no goal beyond making it to the next cold town, the next silent godstone.  Without the gods, the world is left a vast, empty wasteland without direction, motive, or meaning.

Even the apocalypse loses its sense of purpose.  The great mythological ending to the world that the gods once envisioned—an enormous serpent prophesied to swallow the world—is instead replaced by a slow, creeping “darkness” from which even the dredge are flying.  The serpent itself expresses disappointment with this decidedly less dramatic Armageddon, but it is as helpless and directionless as any of the humans.  It seems that instead of a giant, cataclysmic monster ending the earth with a bang, the world is resigned to be smothered in a whimper.

The Banner Saga’s depiction of a godless world echoes clearly in our own time; one can’t help but sense the developers’ yearning for an older age with its legends, heroes—and yes, its gods.  In the art, lore, and music, there is certainly a love for ancient Scandinavian culture grounded in a post-modern nostalgia—one that wants to believe there is a center to the universe, to give the world purpose and direction.  But by the end of the game, it turns out to be only that: nostalgia.  There is no clear hope in The Banner’s Saga’s godless age, which looks to be swallowed up in darkness and despair.

As Christians, we may be thankful that we do not live in such a world, or at least that we have something better to look forward to.  Such a perspective allows the player to feel wonder instead of despair at the towering, God-given vistas that show human beings to be so small and so frail.  It envisions a brighter future not only after the apocalypse, but even because of the apocalypse.  It positions the beautiful art and music not as relics of an irretrievably lost past, but as the faint glimmerings of a greater beauty that will one day be fully realized.  It renders even death a gain, not the loss that The Banner Saga seems to suggest.

Or perhaps that brighter, more hopeful world actually is the world The Banner Saga depicts.  I won’t spoil the ending for you, except to say that while the game wraps up, appropriately enough, on a note of loss, that final note also carries a hint of hope—a hope that perhaps, a bleak, empty wreck of a world is not all there is, and that death is not so final as it appears.  A fairer world lies beyond, and who knows what—or who—might await us there?

John Kloosterman has an M.A. in English from Baylor University and has had stories featured in Cast of Wonders, Daily Science Fiction, and Futures Magazine.  He teaches writing at Mclennan Community College in Waco, and in his spare time studies medieval literature and video games (usually separately). He also occasionally enjoys watching various cartoons and anime with his friends.