The Common Rule by Justin Earley is graciously available free to Christ and Pop Culture members until July 17, 2019, through our partnership with InterVarsity Press.

The Common Rule by Justin Earley begins with an all too familiar anecdote in American culture—that of a seemingly successful man riddled with anxiety, worn down with the burden of his own achievements. Unaided by medicinal intervention, Earley was eventually left to face the subtle but devastating root of his anxiety: a life established on damning habits, one that nominally pointed to God but was practically turned toward self, achievement, and the practices required to honor both.

Earley coined his rule of life “The Common Rule” because it was intended for the common American—those who, like Earley, find themselves buying into American habits that divert us from the practices of Christ and toward the practices of achievement.

After seeking pastoral intervention and accountability from friends, Earley was able to overcome his anxiety not through seemingly drastic changes, but by the close examination and alteration of life-defining little habits. Though, in most cases, habits are involuntary, often subconscious acts, Earley found that they can operate as a sort of liturgy. For example, just as liturgy is a repeated practice intended to invoke worship, so our habits are frequently repeated acts that, intentional or not, invoke a sense of worship. Americans in particular swim in the cultural waters of meritocracy—a system that values, and perhaps even worships, achievement so much that we do not question the cost we pay to receive it. Earley, like many of us (myself included), had made it his goal to be perpetually available, to remain plugged in to current events at all times, and to never turn down an opportunity. To uphold these things, he reasoned, was to honor the freedom American ideals were established upon. The irony in pursuing what superficially seems like freedom-inducing practices is that it often creates anxious slaves to freedom. Thus, Earley reoriented his goal to create a new “rule of life,” a term introduced to Earley by his pastor and adopted from the practices of the likes of St. Augustine and St. Benedict. Essentially, a rule of life refers to the minute practices of daily life that work together to form an overarching goal. Earley coined his rule of life “The Common Rule” because it was intended for the common American—those who, like Earley, find themselves buying into American habits that divert us from the practices of Christ and toward the practices of achievement.

The Common Rule is refreshingly relatable, practical, and convicting all at once. Earley does not simply identify the more damning minutiae of American culture; he links to the subconscious habits many of us have formed and offers subtle shifts. For example, Earley adopted such habits as turning his phone off for an hour each night, intentionally engaging in conversations with friends, and taking a day off each week. None of these things are drastic life changes, and yet they profoundly impacted Earley’s life, pointing to the unseen reality many Americans face: our habits are definitively formative, and yet most of us do not intentionally form our habits. We engage in the liturgy of habit without ever examining what it is we are truly worshiping. The Common Rule offers tangible, manageable shifts in habit that might help to divest ourselves of the unseen, often hurtful waters of American culture, making this month’s member’s offering one you don’t want to miss. 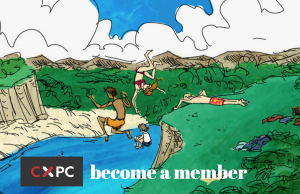 To receive a digital copy of Justin Earley’s The Common Rule, consider becoming a member of Christ and Pop Culture for as little as $5 per month. You’ll get free stuff each month, full access to our digital Christ and Pop Culture Magazine (including all back issues), entrance to our exclusive members-only group on Facebook—and you’ll help us keep the lights on. Join now.

Made for Friendship by Drew Hunter, Free for CAPC Members

By exploring a practical, biblical understanding of friendship that views Christ as the ultimate model, Made for Friendship will hopefully help many of us move toward deeper and truer friendships with those around us.

Gardeners’ World and the Object of Attention

COVID Clashes with Capitalism Culture and a Return to School

Cuties Isn’t the Problem: Our Cultural Addiction to the Sexualization of Minors

The Performers We’ve Lost and the Stories They Carried

Videogames Probably Don’t Cause Violence, but They Sure Seemed like a Good Scapegoat in 1993

Persuasion 201 | Taking America Back for God