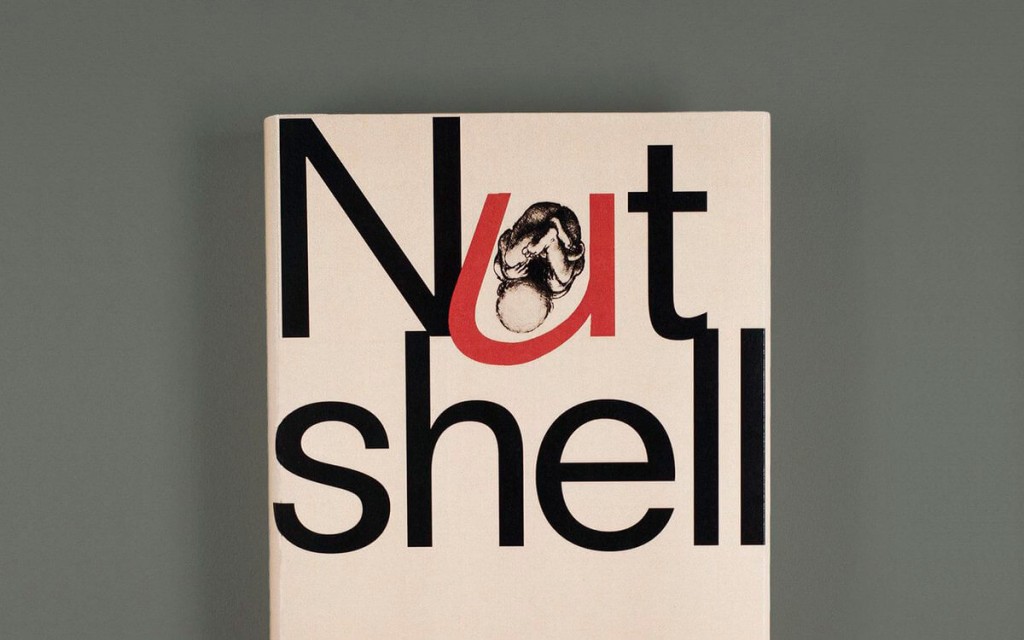 Note: This article contains some spoilers for Ian McEwan’s Nutshell.

The beginning of Ian McEwan’s new novel, Nutshell, surely deserves a place in the annals of great opening lines. In nine words it encapsulates our narrator and his place in the world: a child waiting to be born who is capable of thinking and telling us his story, but of very little else.

Nutshell is a bravura attempt on the part of one of our premier modern novelists to imagine life in a period and place that none of us can remember, though we’ve all experienced it. And not just life on a simple level, but life that’s fully realized and three-dimensional. Our narrator, we quickly realize, is a far more erudite fetus than we might have expected to encounter.

McEwan offers a reason for this: the child’s mother, Trudy, likes to listen to audio books, educational podcasts, and radio shows, thus unwittingly allowing her unborn child to develop the vocabulary and ideas of a college professor. He’s sharply opinionated on current affairs — sometimes echoing the viewpoints he’s heard, sometimes satirizing them — and acerbically opinionated on the sexual and mental prowess of Trudy’s lover.

But as precocious as he is, there’s one thing our young narrator doesn’t realize: he’s living out his own version of Shakespeare’s Hamlet. Just in case we don’t catch it in the story’s details — Trudy’s lover is her husband’s brother, Claude — or in the quotations and paraphrases scattered throughout, this is made quite clear in the book’s epigraph, which comes from Act 2 of Hamlet: “Oh God, I could be bounded in a nutshell and count myself a king of infinite space — were it not that I have bad dreams.”

This means, of course, that this child is going to be a silent witness to the murder of his father, John.

Could there be something inside each of us that whispers of the existence of goodness — the image of God implanted in our natures?

Most of us are familiar with the “locked room mystery” and other such restrictive plots, but having a narrator witness the crime while jammed into a tiny space, with barely any room to move and only one wordless method of communication, takes the form to new heights. The twists and turns of plot and character are brilliantly constructed to aid in our protagonist’s moral and emotional development. He sympathizes wholeheartedly with his father’s plight until he learns that John, who once wanted him — who tried for him for “years,” according to Trudy — wants him no longer. The resulting feelings of distress and abandonment complicate his reactions and cloud his judgment.

As for Trudy, despite being only a couple weeks from her due date, she pays him little attention and drinks far too much for a pregnant woman. Though her child is aware of the danger to his health, there’s nothing he can do about it, so he amuses himself by playing wine connoisseur (“We’re sharing a glass, perhaps a bottle, of Marlborough Sauvignon Blanc… I would have gone for a Sancerre, preferably from Chavignol”). But not everything she does can be brushed off so lightly. Though he’s horrified at what she plans to do to his father, the child’s still aware every second of his utter dependence on her. “Still love her?” he asks himself after hearing her plans. “If not, then you never did. But I did, I did. I do.”

So what is an unborn witness to do? There are only two actions our narrator can take as the drama unfolds outside his “nutshell” — he refers to these as his “morsel of agency” — and over the story’s course he eventually tries them both. Most of the time, he has very little success (“With both heels I kick and kick against [my father’s] fate”). But do his efforts mean that he’s truly innocent, or does his dependence on his mother involve him in her evil act?

And there are times when the child can concentrate only on his own fate. If his mother is caught, will he born in prison? Will he be given up for adoption, as his uncle wants? About to be born into a situation out of his or anyone else’s control, does he have any hope for a decent life? It’s impossible to blame him for being preoccupied with these questions, but if he allows them to interfere with his longing to do what he can for his father — as little as that is — McEwan suggests that his moral growth will be stunted. And if he thinks about them too long and hard, he will fall into despair. “I see no scheme, no plausible route to any conceivable happiness,” he muses at one such moment. “I wish never to be born…”

The issues McEwan raises in this strange, brilliant novel provoke serious thought. One doesn’t have to believe that a fetus in the womb could be a genius, keenly observant of adult activities around him, to be led to reflect on how our actions and words, and even our thoughts, can affect the generation coming after us in ways we would never expect. But Nutshell goes far deeper than that, to the heart of how we form a moral understanding of the world.

Our nameless narrator is hardly a blank slate, but how does he come to believe in goodness, and more than that, to desire it? He has listened to the same teachings his mother has, but she turns away from morality even as he gropes his way, with many stops and starts, towards it. What makes the difference? Could there be something inside each of us that whispers of the existence of goodness — the image of God implanted in our natures? Something that love might spur us to accept, or that anger and vengeance might tempt us to reject?

There is something, certainly, that at last impels our narrator to make a fateful decision. He is small and limited and helpless, but the one choice he is able to make can be used by forces greater than himself to avenge what he could not prevent.

It’s not giving away too much to reveal that our narrator’s last words to us are “The rest is chaos” (one last twist on Hamlet, whose final words are “The rest is silence”). But the reader, though understanding of his viewpoint, may not quite be inclined to agree with him. We’ve watched him battle his way past obstacles both physical and emotional, in pursuit of the justice he has come to believe in, even though he has every reason not to. The veneer of jadedness, constructed in response to unutterable bleakness, masks the stirring of something nobler in his character. He leaves us with a tiny glimmer of hope — hope that despite the brutalizing effect of what Hamlet called “the thousand natural shocks that flesh is heir to,” one can still live a life of meaning and purpose.

Gina Dalfonzo is the author of Dorothy and Jack: The Transforming Friendship of Dorothy L. Sayers and C.S. Lewis and One by One: Welcoming the Singles in Your Church, and editor of The Gospel in Dickens. Her work has been published in The Atlantic, Christianity Today, First Things, Aleteia, and elsewhere.