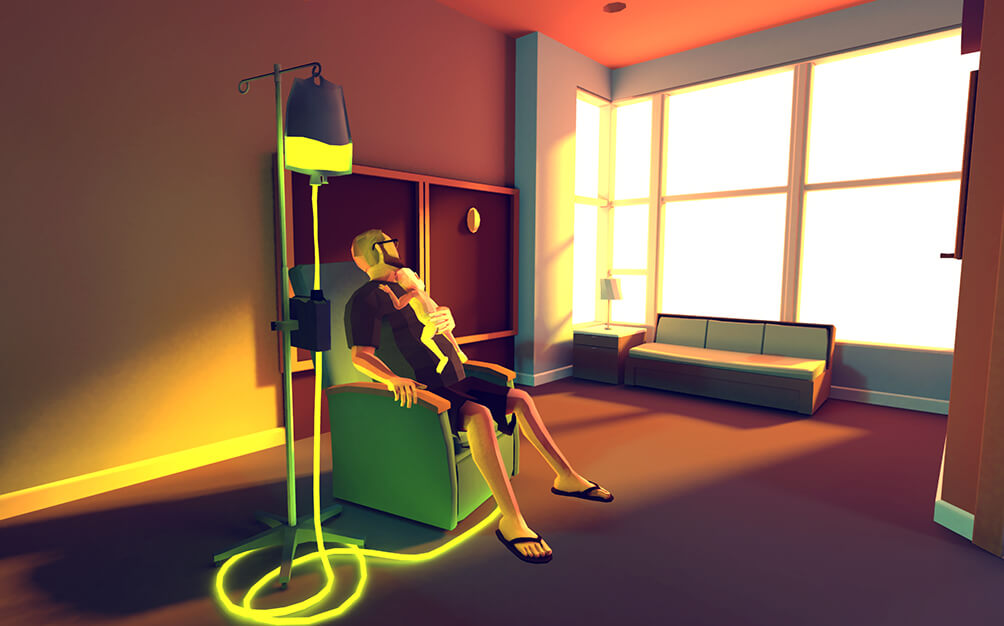 Note: This review contains potential spoilers for That Dragon, Cancer.

“Doubt can be a bond as powerful and sustaining as certainty.” — John Patrick Shanley

One of the more compelling and important shifts in literary history occurred in the 1950’s and 60’s with the introduction  of confessional poetry, a movement in which poets began to explore intensely personal themes of death and relationships in ways they’d rarely attempted. Confessional style centered on personal ruminations and stories, with the first person pronoun “I” serving as a gateway into the complex psychological workings of such experiences as grief, tragedy, and the ups and downs of personal relationships.

We may be broken, but ‘That Dragon, Cancer’ confesses that we are never alone nor without hope.

After playing That Dragon, Cancer, the first release from Numinous Games, I’m beginning to think that gaming has finally begun to explore a confessional approach to these themes as well. TDC’s poetic meditation on death and hope is unique not only because it’s well made and experimental, but also because we’ve simply never had a transparent, autobiographical game quite like it.

That Dragon, Cancer is an abstract journey through the life of a family as they struggle to overcome their youngest son Joel’s cancer diagnosis. At times, it can be both devastatingly beautiful and hopeful and equally emotionally draining. The player views grief and cancer through the eyes of Joel’s parents, the Greens, but the game doesn’t manipulate you into empathy. Rather, it slowly and purposefully relays the horror and uncertainty of cancer while also showing a family’s attempt to reconcile the existential questioning that accompanies the dragon’s presence.

The whole game can be completed in a little over two hours, but each individual chapter manages to capture the emotional roller-coaster of the Greens’ journey. There’s one particular chapter, “Drowning,” in which Ryan, Joel’s father, accuses his mother Amy of blind hope. The questions Ryan’s doubt raises dominate the game’s latter half: What is the significance of pain? Are we, with all our relationships and self-narratives, ultimately insignificant in God’s grand design? Does he care?

These aren’t easy questions to ask or answer, nor does Numinous shy away from showing the cost of faith and how it strains Joel and Amy’s marriage. Halfway through the game, there’s another scene in which Ryan and Amy are sitting in a room with two doctors who began to talk about Joel’s future. I sensed the impending news would be tragic, but Ryan’s reaction spoke volumes about both the game and where it was taking me: “I knew it, I knew it, I knew, I knew it. No. No, no, no, no, no, no, no, no, no, no.”

Appropriately, TDC’s control scheme and gameplay push our attention toward moments like Ryan’s reaction. Our point of view shifts radically from chapter to chapter; in one, we play as a duck while being introduced to Joel, while in another, we’re inside the mind of doctors as their thoughts betray the ease with which they deliver a grim prognosis. Each time, we do little more than click and move the mouse around the screen, but the limited movement fits the game’s tenor. There are moments of unexpected joy during Joel’s dreams, as well as unsurpassed sorrow as cancer creeps closer from the fringes of the game’s environments—but in each circumstance, we’re still responsible for advancing the story through to the next moment. The effect is that the game’s impact, for better or worse, is only limited by players’ willingness and ability to accept the Greens as they struggle through Joel’s diagnosis.

One design choice in particular stands out as perhaps the best example of how TDC prompts introspection: throughout the game, we’re not actually shown Joel’s face. We see limited facial design with Ryan, Amy, and two of Joel’s doctors, but Joel himself communicates only through minimal vocabulary and physical motions. His face is a blank, leaving us to experience what happens in his story rather than intuit how he feels based on facial cues.

I initially struggled with that decision, wanting to imprint my emotions onto his virtual representation. But over time, I grew to both appreciate and understand its necessity. Joel’s story echoes 1 Corinthians 13:12, where Paul promises his readers that their limited understanding of reality, life, and pain will be lifted to reveal a grander, more gracious design. After experiencing so much heartache and grief, and after listening to Amy and Ryan pray for peace and question God’s delay in granting Joel some measure of deliverance from his illness, I looked at Joel’s face and realized I didn’t need to see anything. I knew him and his family because of the pain they had shared with me. What was known in part was now fully known, and the veil of grief, the sting of death, was mine to share alongside both the community of people who play this game and those who’ve seen cancer’s sorrowful, bitter touch.

Over the past few days, I’ve spent some time watching others play TDC on various streaming sites. One particular scene in the hospital seems to affect each player the same way: They simply want to end Joel’s pain. That’s the burden of playing: We’re required to shoulder the Greens’ care as the price of admission. Christians know that burden will be lifted—that we grieve both like and unlike others who grieve. Even so, though, trying to responsibly convey hope in times of grief can be difficult. We need vehicles for our pain to be infused with the message of a hopeful gospel—and that’s where the power of That Dragon, Cancer reveals itself.

For all of its wretchedness and sting, the shadow of death is often where we find grace in beautiful and unexpected ways. Yes, grief, sadness, misery, and evil take those whom we love away from us. Yes, we struggle because our words and emotions can betray us when we desperately need them. Yes, faith can seem to leave us without any support. And so yes, I wept for Joel. Again and again, the game brought me to tears.

But it also let me hope. And for that, I’m thankful. This story continues beyond tragedy into the grace we’ll one day fully understand—even if the immediate cost seems unbearable. Stories like TDC remind us that even the most piercing tragedies are only for a season. We experience them to know ourselves and to know our God. When doubt and fear threaten to drown us in our own uncertainties, those moments remind us that we’re human, that our faith isn’t in vain. We may be broken, but That Dragon, Cancer confesses that we are never alone nor without hope.

Nathan Valle lives in Lynchburg, VA, with his wife, baby, and their dog. He teaches English for Liberty University, and he knows that Marvel is infinitely better than DC.