Spoiler alert: Considering the profound depth of Horizon’s themes and main question require discussing pieces of the mystery that are not revealed until later in the game. The story is best experienced in its original unfolding in the game. If you do not wish to read any spoilers, stop here and don’t read on.

Before Tesla/SpaceX CEO Elon Musk was pronouncing the advent of World War III due to artificial intelligence, the video game community was exploring the means, motives, and fallout of such doomsday prophecies. No game has considered these questions with greater texture, depth, and care than Horizon Zero Dawn. After playing through its original story in the early weeks of its release last spring, I have still found myself regularly thinking about this game. Now as its expansion, The Frozen Wilds, releases this week, one of the year’s best games deserves a closer look.

The great irony is that despite Horizon’s attempts to argue that only human technology rightly used can save us from human technology misused, the story borrows much of its shape from the biblical narrative.In Horizon, our protagonist, a young woman named Aloy, finds herself in a post-post-apocalyptic world. Civilization exists, but it has returned to its more tribal state, with one major exception: bands of mechanical beasts that roam the countryside. The game’s narrative is directed by a central question: How did we get here? Much of the game unfolds as a mystery novel, as Aloy uncovers bits and pieces of the answer to the question—often out of order and without clear instructions for piecing them together.

Aloy herself is something of a mystery. We start the game knowing little of her past and identity, and yet the deeply human interaction that Aloy has with other characters fills out her personality and makes her, in the final scene of the game, deeply human. That Guerilla managed to create such a strong female heroine without resorting to any sexualization is commendable itself—especially in an industry that has historically relied on the sex appeal of female characters in a market dominated by men. After passing through a coming-of-age ritual in her home village, Aloy must come of age in a much larger sense: she must seek to understand not only herself, but also the paradoxical world around her, a world complete with both highly intelligent electrical beasts and bow-and-arrow warriors.

The Technology That Enslaves

This paradoxical world where advanced technology and nature have an ambivalent relationship reflects one of Horizon’s main questions: what can and should be the place of technology in civilization?

Horizon’s answer to that question is not simple. On the one hand, the game’s landscapes, colors, and locations feel hand-crafted—their own sort of argument for intelligent design; the game practically shouts at you to get outside, explore, or go visit Zion National Park or the Grand Canyon. The beauty of the world cannot be overstated; if you need convincing simply look at some of the pictures users have taken using “Photo Mode.” The beauty of the natural world in Horizon is a testament to at least part of its answer to the main question; insofar as technology exploits, destroys, or removes us from the beauty of the natural world around us, it leaves us poorer as a civilization and as individuals. Of course, here one of the ambivalences of the game becomes readily apparent: in order to receive this message from the game, you must hang out in your living room for several dozen hours playing video games on a screen. Apparently we need technology to remind us of its limitations and dangers, even as it perhaps embodies them.

The world of Horizon evokes elements of the eighteenth- and nineteenth-century movement of Romanticism. One of the primary themes of Romanticism was man versus nature—with nature in its indomitable power the inevitable victor. A frequent subject of Romantic artists were medieval ruins, which evoked both the reconquest of nature and the nostalgia of a lost civilization. Compare for a moment an image from the game with J. M. W. Turner’s Tintern Abbey (1794): 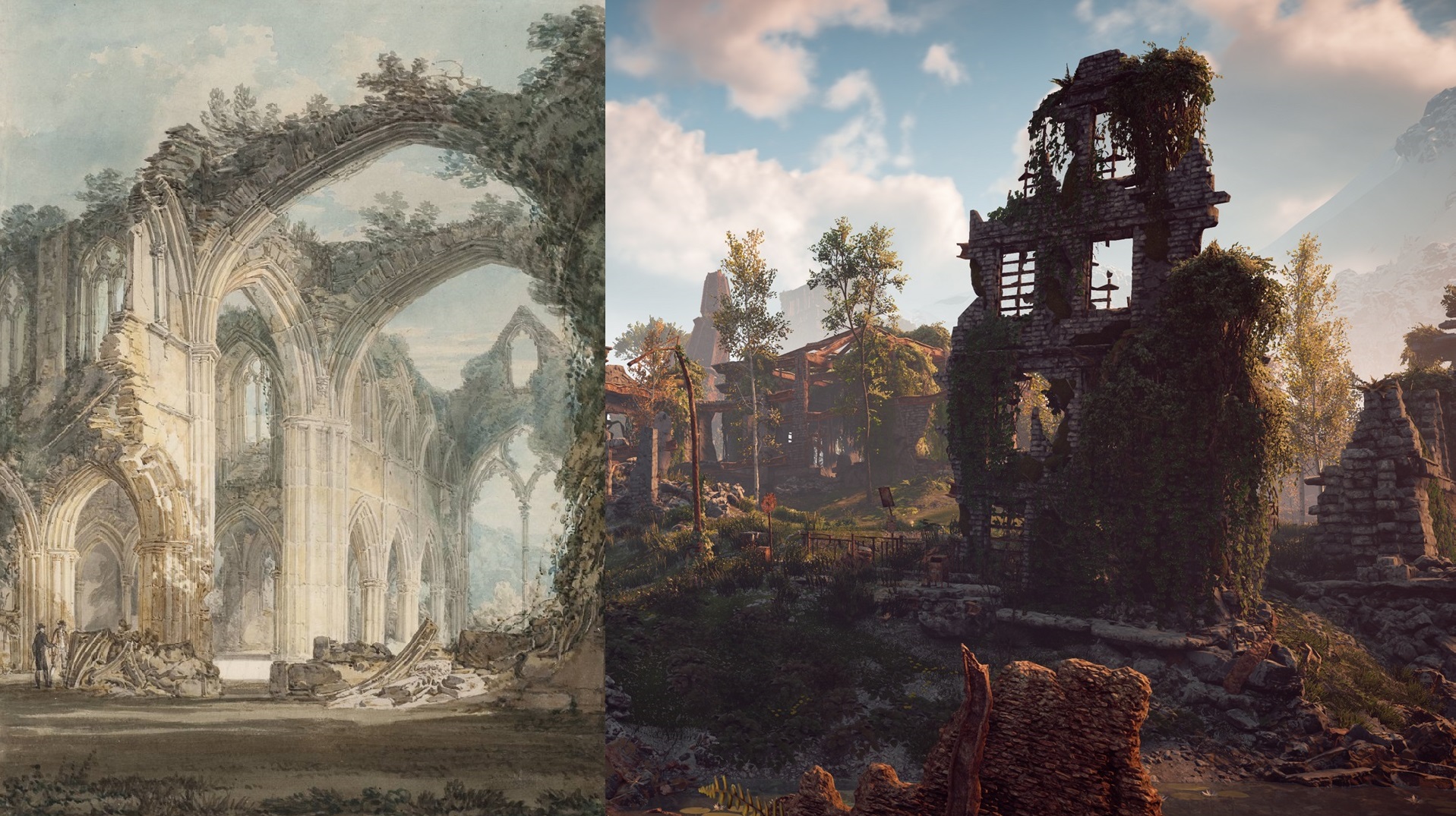 Romanticism valued the place of nature in a world that was being revolutionized by industry, a time when the value of creation was in how it could be exploited for resources and profit.

The Technology That Saves

But Horizon’s answer to the place of technology is not a simple rejection of human innovation in favor a return to the natural world. The central question—how did we get here?—is progressively answered throughout the story as we find out that this apocalypse was indeed of human engineering. Here the story follows the well-traversed ground of artificial intelligence that becomes smart enough to self-replicate and take over the world. And yet the story never feels like an A.I. retread. It examines the scenario of hyper-advanced A.I. through a human lens. How did human hubris create technology that has the ability to destroy life itself? Can technological advance be exclusively used for the building up of communities and the solving of problems or will it inevitably become weaponized? Should the beauty of the natural world itself lead us to pause and consider how technology might impact the world in adverse ways?

Even as advanced artificial intelligence is gradually revealed to be the cause of Earth’s dystopian future, Horizon’s solution involves Aloy gaining the ability to use various technologies that are remnants from that lost world. The massive secret project from which Horizon Zero Dawn draws its name is a technological solution to a technological problem. Our story’s villain, Ted Faro is responsible for creating “peacekeeping” robots that have gone out of control, threatening to destroy the entire of the living world. Project Zero Dawn is the last-ditch effort of Dr. Elisabet Sobeck to save the world. Where Faro represents technology weaponized, Sobeck values technology for its power to make human life better. Zero Dawn is a complex and elaborate plan essentially to re-create the world after the robots have destroyed it using databases of human knowledge, factories to produce robots that could terraform the earth, and a cloning system that would repopulate the world with a new humanity. It seems that the only thing that can save us from technology’s tyranny is technology itself.

It’s here that we approach some of the limitations to Horizon’s storytelling. In weaving a thoughtful, complex tale of human pride, fall, and redemption, it can only imagine a redemption authored by humans: we are the only ones who can save us from ourselves. In this way it echoes some of the storytelling weaknesses of a film like Interstellar, which cannot imagine an answer to humanity’s dystopian future outside of humanity itself.

Horizon considers religious explanations for the world in the forms of the various cultic beliefs of the tribes which inhabit Horizon’s world. At times cults lead to the worship of idols, human sacrifice, and a fanaticism that displays the worst of human nature. At other times the worship of the divine leads to displays of loving self-sacrifice and a fierce commitment to the good of others. However, these religious beliefs are shown to be mere superstitions, primitive explanations for things that only science could truly explain. It adopts a form of positivism’s “Three Stages,” eschewing religious explanations for how we got here as well as how we might be saved for a scientific one.

The great irony is that despite Horizon’s attempts to argue that only human technology rightly used can save us from human technology misused, the story borrows much of its shape from the biblical narrative. The beautiful created world is left a charred husk of itself due to human hubris. Redemption must come in the form the incarnation of Project Zero Dawn’s creator, as Aloy is ultimately revealed to be a literal genetic match of Dr. Sobeck, placed into the world in order to save and restore it to its original purpose. In the end, Horizon Zero Dawn is a story about creation, its fall, its redemption, and its restoration, but one in which technology is the true religion and artificial intelligence the ultimate god.

Ultimately Horizon offers us a disenchanted redemptive arc that in its best moments echoes the Christian narrative of the good-yet-fallen creation restored through the redemptive work of Christ, yet it cannot come to terms with a savior outside of science or technology. Scripture offers us a picture of a creation that “declare[s] the glory of God” and “proclaim[s] his handiwork” (Ps. 19:1). Human rebellion leaves that creation scarred, yet longing for a redemption that comes from the very God who created it. As the Church father Athanasius put it, “the renewal of creation has been wrought by the self-same Word Who made it in the beginning.” The Word who “was in the beginning with God,” who “became flesh and dwelt among us” (John 1:2, 14), and in whom “all the fullness of God was pleased to dwell, and through him to reconcile to himself all things, whether on earth or in heaven” (Col. 1:19-20).

Despite Horizon Zero Dawn’s compelling story, complex characters, engaging gameplay and gorgeous setting, its final answer for our apocalyptic problem cannot fix what ails us. Only the incarnate Word can remake creation—and ourselves—in his perfect image.