Mare of Easttown is a decent whodunit propelled to titanic emotional heights by Kate Winslet’s searing performance, and even if the final twist fails to convince, Winslet never does. Much to the actor’s delight, the show’s costume designers had little more than “bedhead” in mind when it came to her “look,” freeing her to emerge from the makeup trailer in much the same state as we do when phones or kids tear us from sleep. Rumpled and brooding, to say her character is rough around the edges is to comically understate the point. Detective Mare Sheehan is so aggressively coarse that she rivals the walking calluses lumbering out of Easttown’s manufacturing plants. When she’s not trawling the town’s seamy underbelly, she’s dispatching Rolling Rocks and cheesesteaks, sucking on her vape pen in the biting cold and exhaling torrents of expletives. Miss Marple she is not.

If you’ve ever been around deep grief you’ll know that there’s a radioactive quality to it, as volatile as it is contagious.Cursed with an early success in high school—a victorious shot in a girl’s basketball game that earned her the nickname “Lady Hawk”—she must now wade through the wreckage of her life in the shadow of that early promise. And just in case she tries to drink all this calamity away in the jaundiced light of some dive bar, her little town keeps a meticulous tally of all Lady Hawk’s disappointments: her marriage died a slow death in the wake of her son Kevin’s suicide, her relationship with her daughter Siobhan is critically strained, her ex-husband (now happily engaged) bought the house right behind hers—“I heard he got a really great deal,” her mother reminds her. Speaking of mothers, Mare lives with hers. Portrayed with brittle wryness by Jean Smart, Helen Fahey may not be quite as volcanic as her daughter, but what she lacks in histrionics, she more than makes up for in subtlety.

Mare is also a grandma. Born to her late son while he and his girlfriend were in the throes of addiction, Mare lives in constant fear that Drew will follow in his dad’s footsteps. With his biological mother soon to be released from her recovery program, both Mare and Helen are bracing for a prolonged custody battle. When she’s not dealing with these corrosive personal circumstances, Mare has her professional difficulties to navigate, the most pressing of which involves the disappearance of an erstwhile friend’s daughter. Despite her painstaking efforts, the investigation has turned up no leads, much to the outrage of the community. Episode 1 ends with the death of a young woman in the woods, leading to immediate speculation on whether she’s connected to the missing girl. All eyes are on Lady Hawk to solve the case and to bring the town to a point of closure. Given her current lack of success, however, she’s now obliged to work with another detective, Colin Zabel. Though it’s impossible for Evan Peters to wipe that vampiric look off his face, he does acquit himself well here as a gentle counterbalance to his caustic partner.

The bleached-out winterscape of Easttown mirrors the inner ruin of its characters, the kind of industrial wasteland that produces a Black Sabbath or a Joy Division. People smoke like chimneys before staggering into their dilapidated homes to consume overheated microwave dinners and cheap beer. Every building, fencepost, and face is weather-beaten. It’s the kind of territory that looks out of place in the summer.

Fittingly, the saving grace in Mare’s life is occasioned by one of the worst things she’s ever done. Well aware that there’s no legal recourse for when her grandson’s mother wants him back, she raids the police station’s evidence closet and plants drugs in the recovering addict’s car. When said contraband gets traced back to his station, Mare’s chief handily puts two and two together, confiscates her badge and gun, places her on immediate leave, and enrolls her in mandatory therapy. As a wickedly grinning Mare puts it at the beginning of her first session, “Let the healing begin!”

Despite its rich character development, Mare of Easttown unfolds its plot along fairly conventional lines. It’s in this sense that the show’s manifold twists begin to feel forced. There’s a fine line between genuine unpredictability and the obligatory guessing game that saddles so much current television, and Mare Of Easttown doesn’t quite strike the balance. Suffice it to say, not everyone is who they seem and not everyone is sticking around.

Perhaps these charges are unfair. After all, this is a murder-mystery we’re talking about here. Why begrudge the show its rudimentary twists and “shocking” early exits? All I can say is that these elements have a going-through-the-motions staleness next to the blistering vitality of Mare’s therapy sessions. No doubt, this has a lot to do with the protracted onslaught we’ve all been trying to survive since 2016. To speak of global pandemics, overt and covert racism, widespread political corruption, and festering moral rot in our religious institutions runs the risk of hiding behind large sociological abstractions. We all feel these ravages in our bones. And it’s in the moments when we stop doomscrolling and just begin to take quiet stock of the enormity of all that’s transpired that we begin the extremely painful and confrontational process of healing.

Swelling levels of trauma plus social media means it’s never been easier to lap up other people’s pain unfolding in real time. In fact, it’s safe to say that gawking at present-tense suffering has become for many of us a masochistic form of self-indulgence, “ruin porn” on a human scale. Beyond the obvious morbid curiosity that constitutes a perennial feature of human life, what’s the appeal of soaking up all this agony? It’s certainly not doing anything for our anxiety levels. Mare Sheehan’s therapist has an answer: when we’re in serious pain ourselves, it’s tempting to hide behind other people’s grief.

Mare Sheehan isn’t a reluctant hero; rather, she’s resentful. Having returned the missing girl to her family and now freshly reinstated as a detective, Mare is on the verge of a breakdown and returns to her therapist, this time on a voluntary basis. Like that miraculous shot that made her Lady Hawk, her professional heroism only makes her worry about “this expectation from people to be something I’m not good enough to be.” “Can you tell me what would make you feel good enough?” her therapist inquires. Mare doesn’t have an answer. After asking permission to share her insights on the matter, her therapist responds, “I’m worried you haven’t effectively grieved your son’s death. I think you’ve sought out an external solution to your internal pain. You’ve been hiding behind other people’s grief. First Katie Bailey. Now Erin McMenamin. Even after these cases get solved, the grief is still going to be there, waiting for you. Until you confront it. Do you think you could walk me through the day that Kevin died?”

What follows is extraordinarily painful to watch. Carl Theodor Dreyer famously remarked, “Nothing in the world can be compared to the human face. It is a land one can never tire of exploring.” Winslet brings this observation to vivid life, seamlessly oscillating between defiant strength and aching woundedness as she recounts the events leading up to her son’s death. If you’ve ever been around deep grief you’ll know that there’s a radioactive quality to it, as volatile as it is contagious. Our gut tells us we’re not immune well before our social anxieties kick in. It’s an inherently combustible dynamic; say the wrong thing and get incinerated. That Winslet is able to convey all this with just her face is astonishing.

We see that she still lives in the same house where she cut Kevin’s body down from the beam in the attic. We learn that she tried to catch him but that he was much too heavy; that she held him in her arms until the paramedics arrived; that they had to wrench him from her arms. “Have you been able to go back up to the attic since?” “No one goes up there,” is her peremptory response. She’s rubbed noses with psychos, killers, junkies, and thieves, but the scariest place in her little world is her attic.

Here’s what doesn’t happen when Mare stops hiding behind other people’s grief: She doesn’t get her son back. She doesn’t rekindle her former marriage. Her relationship with her daughter remains complex. Her grandson has yet to hear his dad’s full story. Her heart remains broken. The world remains the world. In this sense, Mare of Easttown ends the only way a story not rooted in fantasy can. And so the show closes with a final shot of Mare, Lady Hawk herself, climbing those attic steps once more, this time in the hopes of emerging not as a resentful hero, but as a broken human being like the rest of us.

The Gospel used to be seen as too good to be true. For a long time now, we’ve received it as not good enough, a brazen intrusion on our journey of self-discovery. Imagine gently talking about the hope of the resurrection with Mare Sheehan as she struggles down that rickety attic ladder. Imagine telling her that death is not the end. Imagine the wild-eyed look of incredulity and outrage—that livid furnace of grief—and we can begin to get a feel once again for the striking audacity of Christ’s triumph over the grave, to feel once again that Christianity is simply too good to be true.

Cameron McAllister is the author (with Stuart McAllister) of Faith That Lasts: A Father and Son on Cultivating Lifelong Belief (IVP). A bookish dweeb who loves scary movies and metal, he’s currently at work on a book exploring the intersection of horror and theology for Lexham Press, due out August 2022. He lives in the Atlanta area (please don’t call it “Hotlanta”) with his wife and their two children. 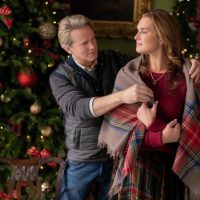 A Castle for Christmas: Netflix, Hallmark, and the “Christmas Rom-Com” of Advent