I recently stumbled across the Twitter account for SparkNotes, and I’m happy to say I fell down a rabbit hole of sheer delight. Who knew that SparkNotes—what I generally considered the cheater’s shortcut in high school—has now become such a paragon of wit and fancy? You may be familiar with what SparkNotes is best known for: creating summaries, easy-to-read vernacular translations, and study guides of classic works of literature. But you might not know that the company has now branched out into a whole new arena of modern vernacular on the Twitter-verse through the mind of one SparkNotes employee, a writer named Courtney Gorter who took over management of the Twitter account a year and a half ago. Thanks to Gorter’s quick wit and ability to create memes out of the classic stories most students have to read in high school, SparkNotes’ Twitter has exploded with a viral following. But the appeal of the account goes far deeper than just the use of clever memes, such as this one: 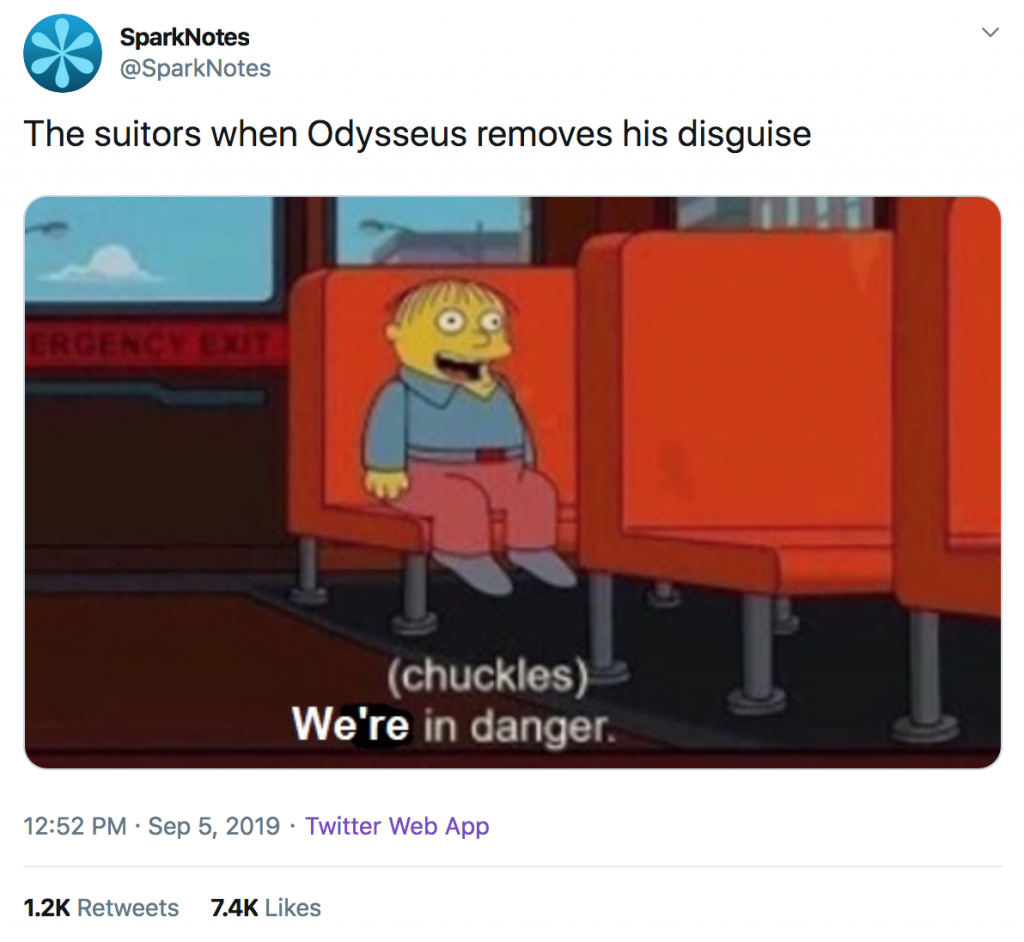 Gorter is only 26 years old, and as a Millennial, she brings a fresh and innovative understanding of not only how to use the company’s Twitter account, but what SparkNotes is supposed to be all about in the first place. As a recent Time expose covering the phenomena puts it, she is seeking to aid her company in achieving their “long-standing goal,” which is to: “[make] classic literature easier for students to understand.” It’s a simple goal, but one that all educators of the liberal arts should prioritize. Gorter isn’t a traditional teacher, but she grasps the importance of the meme as a means of communication, both in young life and in bridging the gap between the voices that penned the classic works she’s tasked with marketing and the educators and youth she has to reach with her company’s products. And she is bridging that gap, with some of her memes accruing well over 100,000 likes. 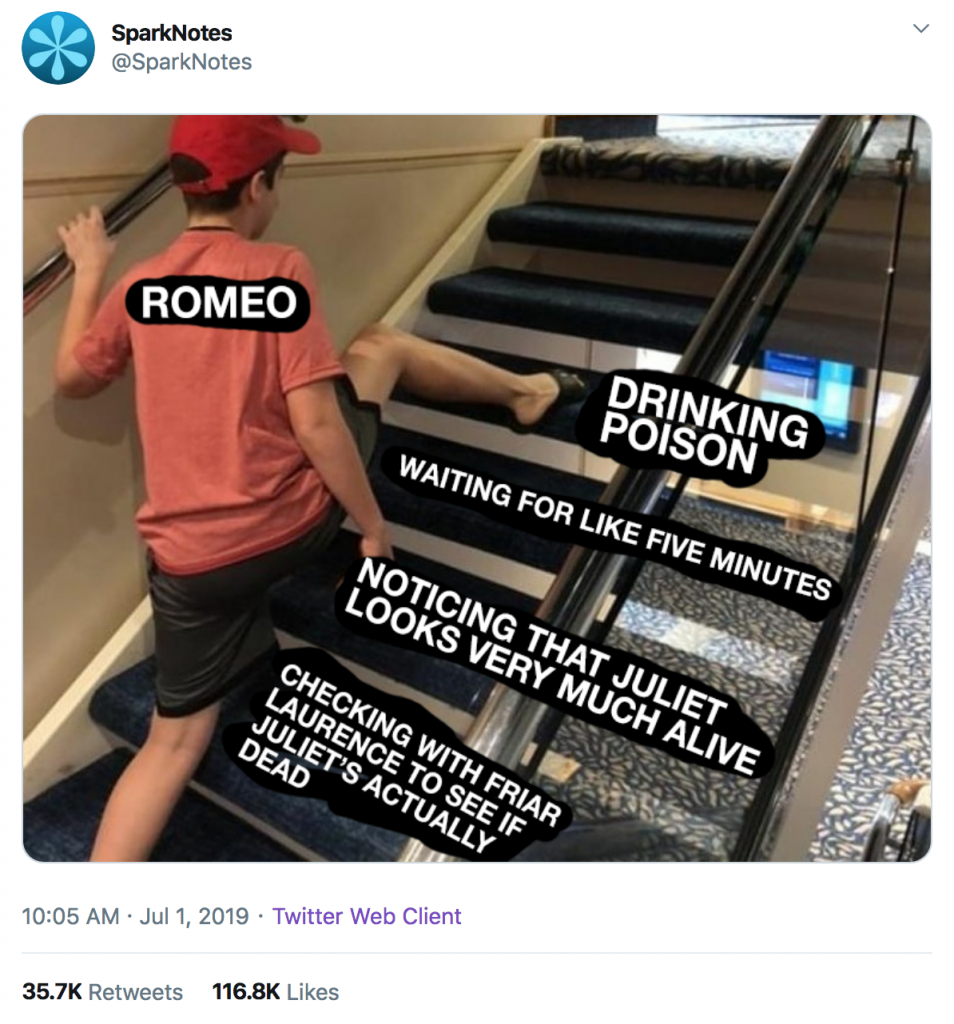 SparkNotes produces, ultimately, educational tools, but in seeking to summarize and provide study materials, what they are really doing is telling classic stories in more accessible ways. Gorter has unlocked a key way to do this for the Millennial and Gen Z audiences, and not just because memes are fun. Through the use of a common language, she has tapped into the Seven Laws of Teaching, inviting her audience into a deeper examination of the works and, ultimately, themselves.

Memeing the classics can be a way to plant seeds of interest, sparks that make seemingly dull, intimidating, or difficult pieces of literature come alive with possibility.

SparkNotes might engender some criticism among elite thinkers or the very scholarly. And by wading into the meme-waters, it might appear to some that they have stooped to an even lower form of communication. This is because they are not particularly academic, but it’s important to remember that SparkNotes are not intended for academics, or for use by academics—unless those academics are instructors seeking to reach students who are struggling. They are for students and traditionally for use by students who wrestle with understanding, engaging with, or even picking up the primary texts.

More than a little bit of a know-it-all in high school, I was always “too good” for SparkNotes. Like Hermione Granger, I couldn’t comprehend people who didn’t want to read books and read them in full, nor did I ever grasp that some people struggle with reading comprehension. True wisdom and understanding comes only with a full consumption of a work—that’s what I always thought. People who circumvent reading anything in full are cheaters, and thus the use of SparkNotes (or anything comparable) is unfair to those of us who put in the hard work of struggling through the primary source material. I was often, as you might be picking up on, full of knowledge, yet lacking in wisdom. Demanding that everyone around me rise to the level of understanding I possessed, yet offering nothing to help them get there.

Later, once I was training to be a teacher, I came to study the Seven Laws of Teaching (by John Milton Gregory), and it changed my whole perspective, especially on how I was to communicate with others. The “Hermione” in me had to die—or at least she had to learn to be not such an “insufferable know-it-all.” A key ideology of the Seven Laws of Teaching is that the goal of the teacher is to teach students how to think, how to learn, and how to grow, not just how to repeat and regurgitate information. A student must be taught how to be wise, not simply smart, only then can they seek and identify Truth. To this end, the Fourth Law of the Seven Laws of Teaching deals with communication between teachers and students: finding a commonality of language to build bridges so that true education can take place.

Stories are always about educating us, as much as they are about entertaining us. This is what makes the liberal arts so powerful and powerfully important. A liberal arts education is an education in how to think and how to be. Stories educate more than just our minds; they educate our hearts. It’s easier to think of classic stories like A Tale of Two Cities or Romeo and Juliet in this manner because many of us were made to read them (rather than picking them up for fun), but the classics of today were once the pop culture of yesteryear. For those who lack interest in the classics—whether through difficulties in reading comprehension, poor education from teachers, lack of access, or some other reason—memeing the classics can be a way to plant seeds of interest, sparks that make seemingly dull, intimidating, or difficult pieces of literature come alive with possibility. More than this, the accessibility of memes on the internet educates while edifying in small bites of whimsy, starting with the known and nudging potential learners into the unknown. It offers a hand by saying, “Here, if you can understand this conflict in The Office, then you already understand this conflict in Romeo and Juliet.”

Romeo during the duel between Tybalt and Mercutio pic.twitter.com/oFQulKZyno

Memes also have the potential to reveal what it is that makes such stories classics. If the central conflict of Romeo and Juliet can be boiled down to a meme or a gif from The Office, then the meme has already done more than just sparked an interest in a classic work—it has begun an education into it. What it is that makes us human does not change despite the shifting mores of the world. What it is to be human—to live, to love, to worship, to fight, to die—remains consistent. Man vs. Man is Man vs. Man, in Romeo and Juliet and in The Office. Starting with a meme—using the common language of our culture—can transform entertainment-seekers into engaged and critical thinkers, over time.

As such, the meme actually reveals something special in each story—that quality which, perhaps, causes it to endure. Beyond the sheer amusement of chuckling at a meme, the “I understood that reference” sensation we get connects us to the stories and connects the stories together across time, genre, and relevancy. The classics become not just dusty stories from the past filled with hard-to-read words and long entangled sentences, but stories that are a little bit more like the ones we enjoy watching on Netflix every night. Such things don’t bring the classics low (is that even possible?)—they elevate all our experiences with all other art and media. To tie a meme to a classic work is to elevate the subject matter of the meme, not to denigrate the classic. When we teach very young children to read, we don’t demand they start with Shakespeare; we first teach them nursery rhymes. It would be foolish to start any person in the education of any great thing in a language they do not understand.

To truly learn something, a person must have or develop a passion for it. Memes can help in this work, especially in a day and age when everyone lives on the internet and consumes media in small bites. It takes both knowledge and wisdom to know how to reach potential learners with stories that seem beyond their reach. Memes may not be a “great” language, but they are a communication tool and a language of our day. In the education of the great stories to a younger generation, a meme can be a welcoming invitation to deeper understanding. It can also teach people of all ages words like exeunt and make them wonder what all this Shakespeare silliness is about, anyway. I would say Courtney Gorter is absolutely “making classic literature easier for students to understand”—one meme at a time. In this, she enters into a great work. 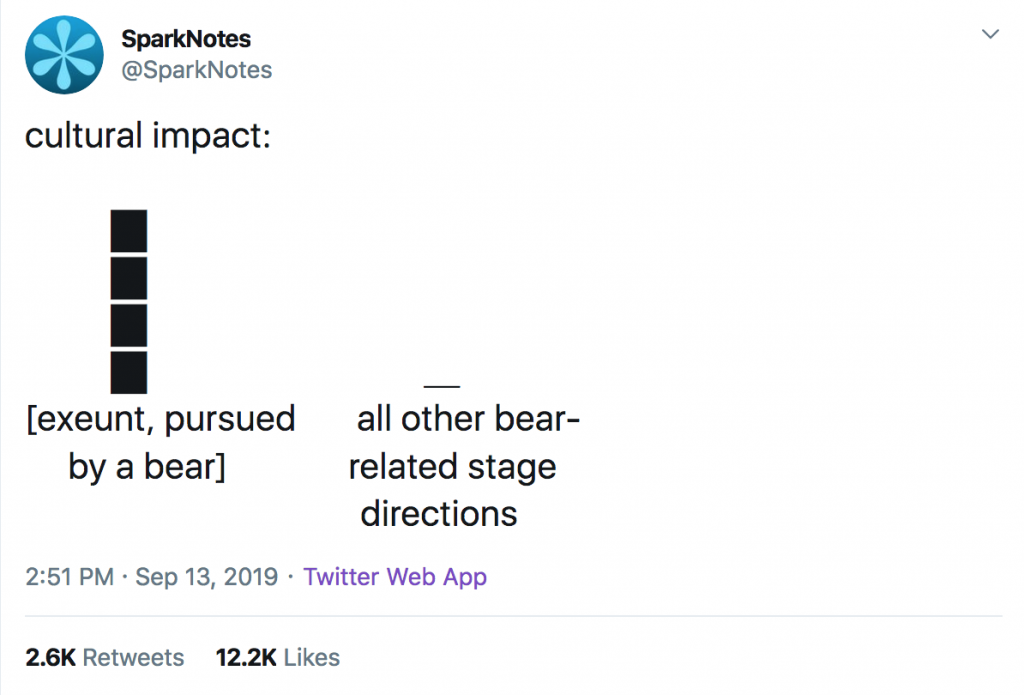