Younger members of Generation X, like myself, have encoded in our DNA the preternatural ability to roll our eyes as hard as humanly possible and mumble “whatever” in the direction of any and every authority figure. So, it is with some amusement Gen X-ers watch the generational war play out between Boomers and Millennials/GenZ. Baby Boomers, as well as some older Gen-Xers, have made it their mission to undercut Millennials since the younger ones entered the workforce like an army of upstarts who came to take over rather than wait their turn. Boomers have responded like the threatened and dying typically do: They’ve retrenched and attacked. Hard.

Generational squabbles, while entertaining for a minute on social media, reveal not just discontent with financial security but expose our temporality on this rock.

The loudest Boomers bent toward generational conflicts apparently see Millennials (and younger) as man bun-coiffed, skinny jeans-wearing, avocado toast-munching, pour-over coffee-swilling free-loaders. They are lazy, entitled, and naïve. Some remain trapped in the mindset loudly proclaimed by the 2013 Time cover story that Millennials are “The Me Me Me Generation.” Case in point, on my first day of orientation at a new job our boss showed a YouTube video mocking Millennials, apparently not fully realizing a sizable portion of his staff fell into that demographic. It did not go over well.

Millennials and GenZ have “clapped back” as they say—not me, because I’m too cool for that—with the utterly epic “Ok Boomer.” It’s their eyeroll-whatever combo, and I must say, it is a spectacular response, infuriating Boomers as it mirrors the dismissal they have shown their successors. The New York Times described “Ok Boomer” as, “a rallying cry for millions of fed up kids. Teenagers use it to reply to cringey YouTube videos, Donald Trump tweets, and basically any person over 30 who says something condescending about young people — and the issues that matter to them.”

“Ok Boomer” encapsulates the most succinct way to retort to perceived Boomer excesses or inattention to everything from income inequality, climate change, expanded power for corporations, and criminal justice reform, to name just a few possibilities. The phrase is a condescending, patronizing pat on the head for those who have been long-convinced their ways are the right ways.

But the fight also illustrates GenX angst concerning its place in the world. Dubbed the “Forgotten Generation,” the youngest members of Generation X are entering middle-age with little-to-no promise of approaching Boomer markers of success. Austin Channing Brown recently named this angst via a Twitter thread, responding to the notion that we all exist in some stunted adolescence: 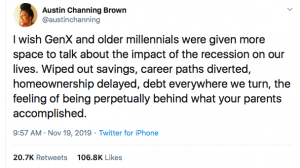 Not long after this tweet Brown explained in longer form the challenges faced by GenX and older millennials, with particular focus given to African-Americans. Her analysis resonates with many in their thirties and early forties. She writes, “The often too-easy label of ‘slacker’ gets applied to Gen X cuspers like myself. But the truth is, by the time we reached the path the older generation had prepared for us, it was nothing but a sinkhole. We didn’t have much choice in the matter of stability.”

The 2008 recession affected home owners and the prospect for home ownership for others. Brown, like many, had to relocate many times chasing available jobs, explaining that neither she nor her husband had been in one company more than four years. Brown revealed that she and her husband have no retirement fund or 401K. Brown summarizes what many feel: “The American Dream, as it were, was unraveling under their feet. It is a particular grief of having everything ripped away. A grieving that deserved more time and attention than it has received.”

No show highlights the current generational struggle better than HBO’s Golden Globe winner Succession, which follows the Roy family. Logan Roy, played by a ferocious Brian Fox, is what would happen if Rupert Murdoch sired the four Trump children: Three of whom want the crown, one does not, along with an obsequious son-in-law employed within the family business, WayStar Royco.

Still, even when art imitates life a little too closely, there are lessons to be learned. The series premieres with Logan’s 80th birthday creating the expectation that he will announce his successor. Kendall, his second son and WayStar executive, assumes the honor will be his. We first see Kendall rapping along to the Beastie Boys—a quintessential GenX group if there ever was one—on his way to close an acquisition that he believes will solidify his footing as Logan’s successor. Kendall’s fluency in “bro-speak” is a sad attempt to stave off middle-agedom by holding onto some vestige of his evaporating coolness.

Kendall represents many within GenX who have been content to bide their time, resting in the promise that all generations not only enjoy their time in the sun, but also inevitably repeat similar errors out of an enthusiasm to wear the crown. Call it the “Rehoboam syndrome.” When Rehoboam assumed the throne following Solomon, he faced a crucial decision about whether to ease his father’s labor and taxation policies, which was the advice of Solomon’s advisors, or to listen to his friends and make his own name by doubling down on current harsh policies (1 Kings 12). He chose the latter, leading ultimately to a divided kingdom. So, too, does Kendall Roy long to make his own way, even though he has no accomplishments to call his own save stewarding his father’s legacy.

Kendall’s aggressive Millennial siblings have their own plans for gaining power within the company. Shiv, Logan’s only daughter, is the clearly the smartest of the bunch but has been overlooked throughout her life due to her gender. Her conniving husband, Tom, also holds an executive position, completing the other half of the dysfunctional power-couple. Roman, the youngest Roy, played brilliantly by Kieran Culkin, is every dead-eyed Bachelorette contestant, who routinely bows to Logan’s anger in the name of financial self-preservation. There are no heroes among the Roys. They are pawns in Logan’s game of maintaining his near-literal death-grip on his seat of power. The Roy name must live on into eternity; that’s the only discernible ethic guiding the Logan and his family.

The Roy kids exemplify Dietrich Bonhoeffer’s commentary on the debate among Christ’s disciples concerning “which of them should be the greatest” (Luke 9:46). Bonhoeffer notes in Life Together that Christian communities, almost from the beginning, can be beset by “an invisible, often unconscious, life-and-death contest…enough to destroy a fellowship.” Bonhoeffer describes the insidious pecking orders we create in order to gain an advantage over one another:

from the first moment when a man meets another person he is looking for a strategic position he can assume and hold over against that person. There are strong persons and weak ones. If a man is not strong, he immediately claims the right of the weak as his own and uses it against the strong.

Every member of the Roy family employs an endless string of one-uppances against the other with no subject off limits if it means climbing the family ladder: Failed takeovers, trips to rehab, divorces, and public humiliations are the Roy family’s typical dinner-time conversations. Such is the life of billionaire heirs and heiresses for the prize of one day sitting on the Roy throne.

In fact, Logan Roy’s last words of consequence to one of his ambitious children encapsulates the generational struggle: “You’re not a killer. You have to be a killer. But, nowadays, maybe you don’t. I don’t know.” While on the surface Logan’s snub appears to be a vote of no-confidence for his child’s abilities to manage the company, his claim reveals either a mentality for corporate survival, or an acknowledgement that the changing world might just be killing his ideology. I’m not certain which prospect he finds more troubling.

Bonhoeffer warns that infighting will destroy Christian communities. I confess that in these uncertain times it is difficult to root for younger professionals, especially academics, who might take “my place.” If I focus daily on my financial and professional stress, student loan debt, and general fear of the future, then I will look for sweeping generational generalities—before or after me—that simply make the burden of the day a bit easier to bear.

Generational squabbles, while entertaining for a minute on social media, reveal not just discontent with financial security but expose our temporality on this rock. Plus, Boomer dismissal of rightly-held grievances as “snowflake” whining violates Paul’s warnings against provoking to anger (Eph. 6:4) and embittering children (Col. 3:21). Mature Christians must rage against this impulse to diminish the concerns of the youth while justifying their errors in order to safeguard their pride or wealth.

In a later episode of Succession’s first season, Logan emerges from a pool, showing for the first time many visible scars on his back, presumably from his brutal childhood. No explanation is given. The metaphor sticks, though, reminding us that we rarely know all of the struggles an individual or generation has endured. That said, all have scars, including the generations that follow us, many of them wounds by our hands.

So, maybe let’s cool it with the generational warfare. Things are hard enough as they are—you know economic pressures, natural disasters, wars and rumors of wars, and such. Okay, Boomer?

Justin Phillips is a professor, writer and editor living in Knoxville, Tennessee. He has a Ph.D. in Christian Ethics from Fuller Theological Seminary. You can follow his writing at justinrphillips.com and on Twitter @Jstn_PhllpsPhD.