I used to love to watch shows like Project Runway, Work of Art, and Top Chef. The fast-paced, creative innovation demanded of the contestants in shows like these appealed to my otherwise natural aversion to the manufactured drama of reality TV. But in watching such shows, I also grew increasingly discontented. I wanted a show to exist for my talents; where was the reality show for the next great American novelist? Where was my shot to rocket to fame and glory—to demonstrate my creative writing abilities to the world? I talked about it so much that my husband and I made a joke of it, because we both knew such a show wouldn’t be very interesting to watch. Writing is a “quiet” talent that requires time and deliberation to perform, and writers tend to be reclusive people with strange, twilight habits. Many aspects of the publishing industry are similarly unsuited to reality TV, as literary agent Eric Smith recently pointed out in a tweet about the show Shark Tank: 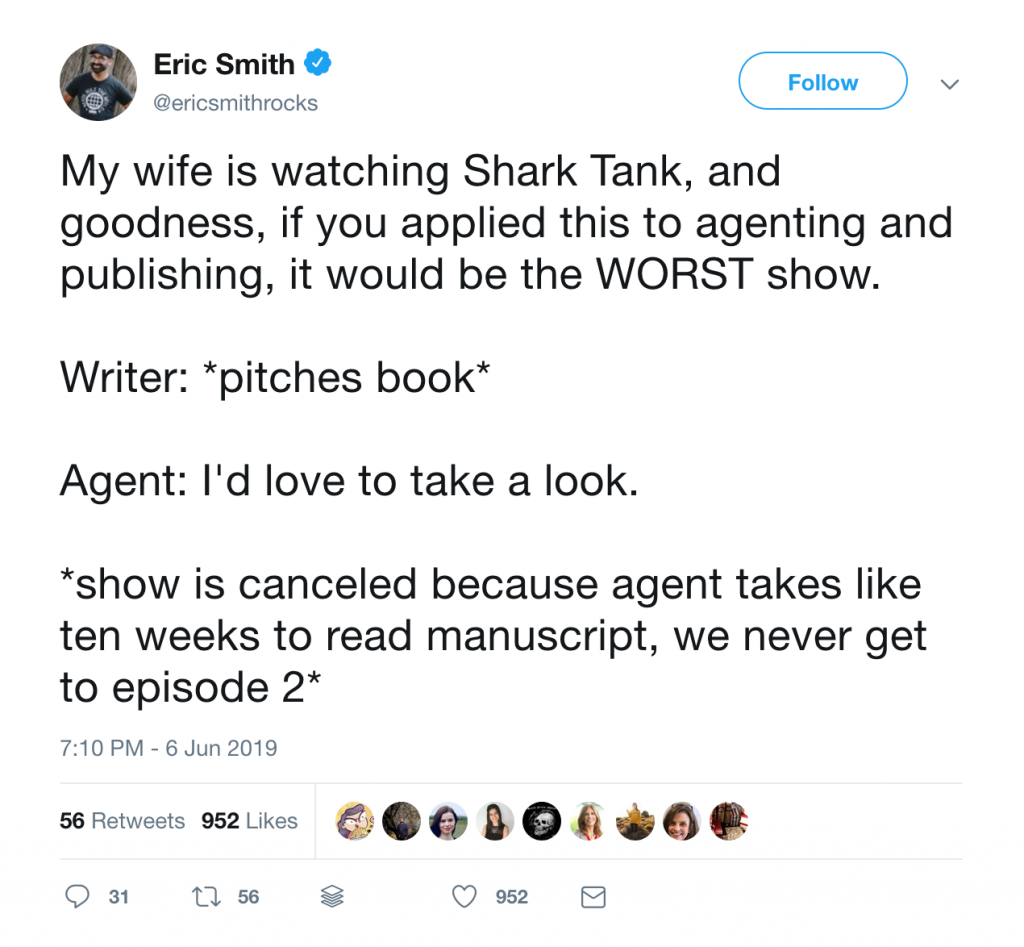 Following a group of writers (or agents or editors, for that matter) would not make for riveting television, even with an injection of producer-invented scenarios.

Busy (foolishly) lamenting that my only talents were non-TV-worthy ones, I failed to take note that these shows are not really about the talents the contestants have, but rather the sheer spectacle generated by mashing such people together and forcing them to perform on cue. What’s demanded of the contestants is a performance for the entertainment of spectators—a performance that must be spectacular enough to rivet an audience, no matter how incredible their actual talents are. Watching the creatives struggle to create in the crucible of the reality show is itself a form of performance art. Although it doesn’t diminish the value of the very real talents the contestants bring to such programs, or the worth of those who participate, there is a cheapening factor to this performance-art-on-demand—a cheapening that just might reduce our view of the artists and contestants, and could shatter their views of themselves.

Competing for titles, money, contracts, and (sometimes even) a person’s affections, all for the entertainment of an audience, can cause figurative deaths—devaluation of a person’s worth, the consumption of their soul. In the arena of reality television, we measure a person’s value by how well they entertain us.

Spectacle runs the risk of doing this, and we are a people of spectacle, as in love with unscripted, public, and dangerous displays of entertainment today as the Romans once were with Bread and Circuses. If anyone has a fantastic, an extraordinary, or an unusual talent, let them entertain us! Like the men in tuxedos strutting into the Moulin Rouge in Baz Luhrmann’s mesmerizing 2001 musical, we demand to be distracted from the stress, mundanity, and monotony of our daily lives by, to quote the movie, a, “Spectacular! Spectacular!” But Baz Luhrmann’s house of entertainment (and prostitution) in Moulin Rouge! hides a devastating secret: its star performer, Satine, the Sparkling Diamond (Nicole Kidman), is dying of consumption. It’s a disease that is an almost silent, invisible killer, except for the coughing fits and flecks of blood that manifest as it progresses. Satine’s death is both figurative and literal—the inner rot of her body via the consumption mirrors her struggle to break free of the lifestyle that has consumed her, while her soul has already been laid waste by the spectacle and the spectators. And although her lover, Christian (Ewan McGregor), is fighting to save her, her death is imminent and irreversible.

Our consumption is not without consequences. In the spectacle of reality television, we value those most who perform best. We like to think we’ve evolved beyond spectacles like the Moulin Rouge, beyond Bread and Circuses, but have we really? Blood is no longer spilled on arena sands, but hopes and dreams litter TV studios and stages, and deaths of a different sort than consumptive prostitutes or fallen gladiators take place. Competing for titles, money, contracts, and (sometimes even) a person’s affections, all for the entertainment of an audience, can cause figurative deaths—devaluation of a person’s worth, the consumption of their soul. In the arena of reality television, we measure a person’s value by how well they entertain us.

Not all creative reality shows seem to be so exploitative of the contestants, though. My husband and I recently started watching the show Nailed It! on Netflix. A humorous take on “Pinterest fails” in the kitchen, Nailed It! is a show with a heavy dose of ethos because it is a celebration of highly relatable mediocrity rather than of talent. The judges are silly, the production value low, and everybody keeps everything light and friendly. But, as I’ve watched a couple seasons now, I’ve come to realize it is still, in its own way, a spectacle. The spectacle is in the failure—usually epic, the hilarity in the mundanity of the average kitchen cook trying to play master cake decorator on streaming TV. In laughing along with (at?) people like us, we experience an empathetic catharsis. It is a spectacle of fools. We get to jeer and laugh at the contestants—but from the safe distance of our couches, our mockery buffered by the separation of the screen. In a way, Nailed It! is a reverse echo of the usual creative reality show formula. Rather than finding relief when a contestant doesn’t fail, on Nailed It! the catharsis comes when the contestants fail, as you expect them to—as you would fail if you were in their position. If there is no failure, there’s nothing to laugh at.

One episode of the long-running USA Network show Psych humorously explores our fascination with the thrill of spectacle through an episode focusing on daredevils. When detective Juliet O’Hara (Maggie Lawson) plays the part of the person who doesn’t get what the big deal is, instead of explaining it to her, psychic detective Shawn (James Roday) and his partner Gus (Dulé Hill) line up a bunch of chairs in the police precinct and begin a demonstration via feat-of-office-daredevilry. Who can jump over the most chairs without injury? Before long, the entire precinct has gathered like kids in a schoolyard to cheer on the participants—until good-natured, but bumbling, officer Buzz (Sage Brocklebank) falls short on his leap and whiffs it to the floor. With the restoration to mediocrity, people return to work, interest lost. But at the heart of the episode—and the mystery Shawn and Gus have to solve—is a daredevil who is attempting suicide while dying of cancer and using his stunts as a smokescreen to hide his attempts. Perhaps it’s fitting that such a weighty issue should take center stage in an episode about daredevils, because the spectacle of daredevilry is only exciting insofar as the audience believes in the danger being real. Real danger equates to high stakes, and what stake is higher than death?

There is an undercurrent of these stakes beneath each challenge presented to a reality show contestant, and we—the viewers—crave it. We need the edge of danger to keep us engrossed. We want to fear that someone will fail, or break, or make a fool of themselves. We both hate and love the feeling, and it keeps us watching. Producers know this, and it’s why they manufacture things to cause drama and come up with ridiculous challenges that push contestants to their limits. But because this is reality TV—dealing not with scripts or actors, but with real artists and chefs and designers who hang their real worth on their ability to create, when they are broken down to keep us riveted, the danger to them is also real. In every reality show, there just might be a “Moulin Rouge performer” dying of “consumption”—dying for our entertainment; dying a little bit in some manner; dying to dance for our pleasure.

It’s taken me a long time to be thankful to have a “quiet” talent, but now that I am, I also realize it doesn’t equate to humility or being of more—or less—worth or value than having a loud or bold or vibrant talent. Spectacle in and of itself is not bad, neither is being spectacular. God bestows all good talents on us, and in Scripture, He also did spectacular things. Few things are more spectacular than the miracles of Jesus, let alone rising from the dead. But I think we must draw distinctions between being inherently spectacular, doing spectacular things, and making a spectacle (or demanding people make a spectacle for us). Even in rising from the dead, we do not see Christ making a spectacle of himself for the demands or pleasure of others. When the pharisees demanded a sign of him in Matthew 12 and Luke 11, what they wanted was little more than another performance—Jesus had already been healing the sick, feeding the hungry, and making the blind see. He would not give them a spectacle, but he would of course go on to do more spectacular things. His response to the pharisees was that the only further sign they would receive was the “Sign of Jonah”—referring to his coming death and resurrection. The spectacular acts of Christ ennobled the weak and lowly, gave life, and properly glorified God.

It is important to remember how much people matter to God, especially when we watch them lay themselves, and their talents, bare for our entertainment. When spectacle is used to push people to exploit themselves for our pleasure—and when we in turn measure, judge, and value them based on their talents, then it can turn into a dangerous (even deadly) thing. If someone in Hollywood can figure out how to make any sort of talent a spectacle, they will produce it into a show for the entertainment—the consumption—of viewers. We are all simultaneous consumers and creators of some sort, and the answer is not to cease consuming or creating, but to be diligent in discerning how our consumption crosses into exploitation, especially in the case of reality shows. As I said above, our consumption is not without consequences. We don’t belong to a kingdom of spectacle.