On Monday, December 2, Star Trek fans were saddened to learn of the passing of Dorothy Fontana. Hardly a household name in any other circles, D. C. Fontana (her writing moniker) is a legend among Trekkies, one of the key heroes in crafting the enduring legacy of The Original Series. As a writer and story editor, she created some of the show’s most memorable moments and guided the depiction of its best-known characters.

Fontana’s characters were not written to dramatize a Christian anthropology, but because of their intellectual and emotional authenticity, they cannot help but do so.Becoming a writer was Fontana’s lifelong dream, but the 1960s television studio world into which she entered was not always welcoming of female contributors. After working her way through individual scripts, her various secretarial jobs took her into the orbit of Gene Roddenberry, Star Trek’s creator. Roddenberry’s status as a champion of women’s equality is complicated, but he encouraged Fontana to submit scripts, which she did, receiving credit under her initials to disguise her gender. After the successful reception of her early episodes, “Charlie X” and “Tomorrow Is Yesterday,” Fontana took over as story editor midway into the first season following the departure of two other writers from the job. She held this position through season 2 and continued to contribute in the show’s last season. She would go on to write briefly for Star Trek: The Next Generation in its inaugural season and also contributed scripts to Star Trek: The Animated Series, Star Trek: Deep Space Nine, and even the fan-produced Star Trek: New Voyages.

From the start, Fontana was a woman caught between two worlds. Star Trek was more open to female voices than many shows of its days, featuring episodes penned by writers like Margaret Armen, Jean Lisette Aroeste, Judy Burns, Joyce Muskat, and even eventual Lamb Chop’s Play-Along star Shari Lewis. Only Fontana had any production responsibilities, however, and her scripts include some of the most memorable moments in the series, substantially deepening Roddenberry’s mythology and establishing its best-recognized figures. Not surprisingly, given her context, she seems to have been particularly drawn to characters who, like her, were forced to navigate liminal spaces, uneasy boundaries. So it is little wonder that above all, she gravitated toward storylines about Commander Spock and his family.

Fontana cut her teeth in Trek with “Charlie X,” which wound up being one of the first episodes to air. Even at this early stage, her trademark interests were evident. Charlie Evans (Robert Walker Jr.) was the sole survivor of a ship that crashed on the planet Thasus. The indigenous Thasians bestowed their incredible transmutative powers on Charlie to preserve him in his infancy, but as he boards the Enterprise to reunite with his own species, danger quickly ensues. Charlie is a teenager with all the passions of adolescence, but no human has the power to discipline him because of his Thasian abilities.

Charlie Evans, the super-powered, hormonal teenage boy may seem to have little in common with Fontana, the 27-year-old former secretary who scripted his dialogue. But caught as he was between power and helplessness, between childhood and adulthood, between human and Thasian culture, Charlie was torn by his liminal status—and Fontana, the woman in a man’s world, knew a thing or two about that status. 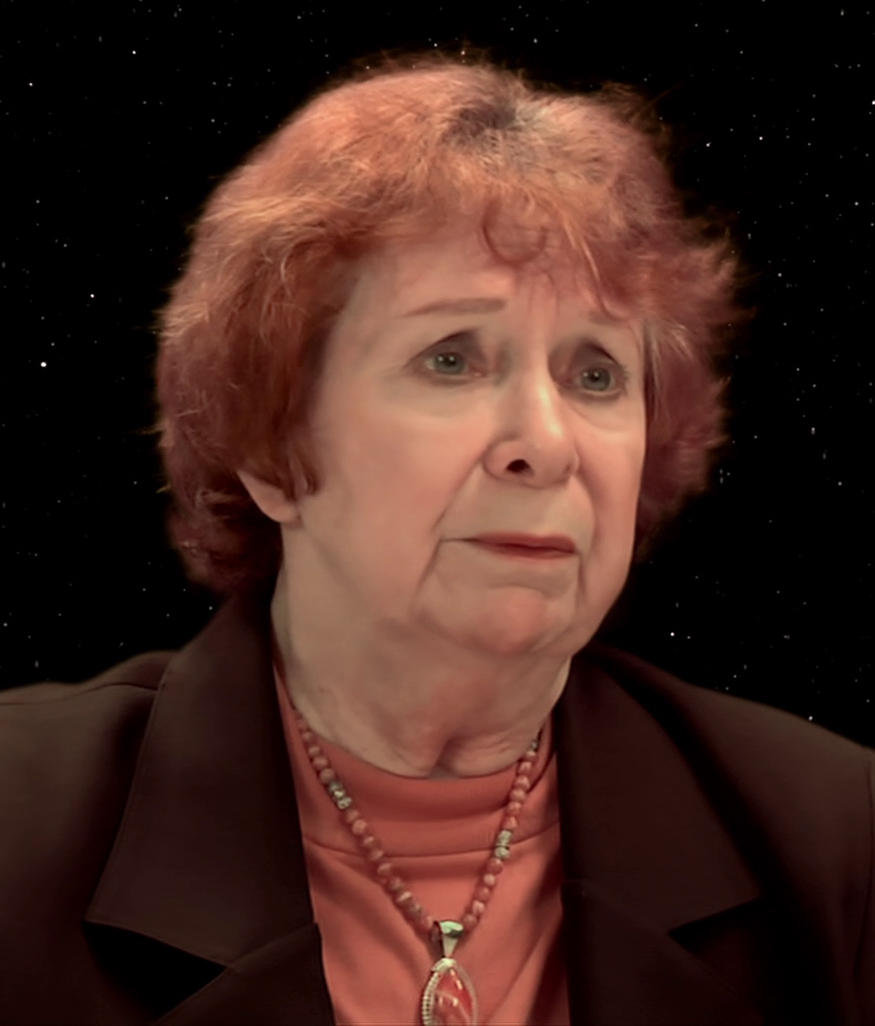 Still, it was not until her third credit that Fontana would truly find her favorite means of exploring these unstable boundaries. Roddenberry’s Star Trek may have pushed TV limits in representation of women and minorities for its day, but it was still fundamentally focused on the dynamics of three men: Kirk, Spock, and McCoy. None of these characters were without conflict, but the most clearly conflicted figure was, of course, Spock. And in him, Fontana seems to have found a sort of kindred spirit, a series regular who was, quite literally, a child of two worlds.

It was Fontana’s script for “This Side of Paradise” that earned her the position of story editor. In this episode, alien spores on an agrarian world push human colonists—then most of the Enterprise crew—into smiling docility. In its original conception, “This Side of Paradise” focused on a romance with Lieutenant Sulu. While such a sub-plot would have added some nice dimension to an under-utilized character, Fontana realized that the plot would make the perfect vehicle for exploring the normally reserved Spock. In her eventual draft, Fontana presented a man caught between his emotions and his duty—duty to his race, duty to his ship, duty to his captain.

In this filmed version, Jill Ireland’s Leila Kalomi tells Spock, “There’s no need to hide your inner face any longer.” And when, under the spores’ influence, a grinning Spock tells Kalomi, “I love you. I can love you,” it is a cathartic moment. This gets upended when Kirk undoes the spores’ effects, rupturing his First Officer’s passive joy with anger, which then slides back into stoicism as he realizes, “I don’t belong anymore.” Even then, Spock’s final assessment of his experience is mixed: “I have little to say about it, Captain, except that, for the first time in my life, I was happy.”

I don’t claim to know the whole inner life of Dorothy Fontana in the late ’60s and beyond, when she negotiated life as a female TV writer. But the ways in which she returned to characters who enact double lives upon themselves seems unlikely to be entirely coincidental. Sometimes, she was aided in that effort by guest stars who memorably brought to life her conflicted figures. Julie Newmar in “Friday’s Child” ferociously embodies Eleen, a woman whose power in her patriarchal world largely centers around her unborn child. William Marshall brings both hubris and dignity to his role in “The Ultimate Computer” as Dr. Richard Daystrom, whose pathos in cultural context becomes implicitly intensified by his status as a black man. Joanne Linville’s role strikes even closer to home as the female Romulan Commander in “The Enterprise Incident,” a woman in power for whose emotional vulnerability can—and will—be used against her. And who can forget in “Journey to Babel” the poignancy of Spock’s parents, Sarek and Amanda, whose lines are delivered with such exquisite nuance by Mark Lenard and Jane Wyatt?

Not surprisingly, many of these performances are strong in part because those actors were interacting with Nimoy’s Spock. Linville’s Romulan Commander is drawn to Spock because she regards him (perhaps rightly) as a possible kindred spirit, another individual caught between the Scylla of desire and the Charybdis of obligation. Sarek and Amanda incarnate the two “halves” of Spock’s split consciousness, reason and emotion. Yet it is the genius of Fontana and her actors that the Spock family drama of “Journey to Babel” never devolves into simplistic binaries. Sarek and Amanda are themselves roiled by their “betweenness”: Sarek truly loves his wife and his son, while Amanda acknowledges that Vulcan logic is “a better way” than human emotionalism, before conceding that “it isn’t easy.” Fontana would later return to this dynamic in “Yesteryear,” her only contribution to Star Trek: The Animated Series, in which Spock’s traumatic childhood on Vulcan is explored. So powerfully did this script transcend the limitations of its half-hour kids’-show format that it was the only episode from the series ever to be regarded with “quasi-canonical” status in the Trek universe.

Why did Fontana find Spock so compelling? For the same reason she helped us to find him so compelling: because for all his obvious alienness, Spock was in other ways (to quote Star Trek II) “the most human.” Not one of us is whole or pure—we are all beings in tension. Those tensions might not be as stark as Commander Spock’s logic/emotion dichotomy. They might or might not be as fully evident socially or culturally as they perhaps were in Fontana’s own life. Her experience allowed her, despite and within the limitations of her day, to give voice through her characters to the ways marginalized groups must operate in contested spheres.

But had her characters been emblems only, symbols of oppression, they could never have taken on the afterlife in fandom that they eventually achieved. Rather, Fontana crafted a bridge, from her own liminal experience to the worlds of her audience. Any Christian knows that our lives by definition ought to be defined by paradoxes and strange borderlines. We are made in God’s image yet, in our sins, subject to his curse. We are citizens of Heaven living on earth, in the world but not of it. We are called to be “all things to all people.” We are one body but different members, playing different roles.

Fontana’s characters were not written to dramatize a Christian anthropology, but because of their intellectual and emotional authenticity, they cannot help but do so. That is because her characters—even (especially?) the aliens—are profoundly human, and the Christian faith presents the most compelling account of our full, tempestuous humanity. Whether faithful congregants or skeptics, all those with minds and hearts can hear her words across the decades and, within the lives of the characters speaking them, can find themselves.