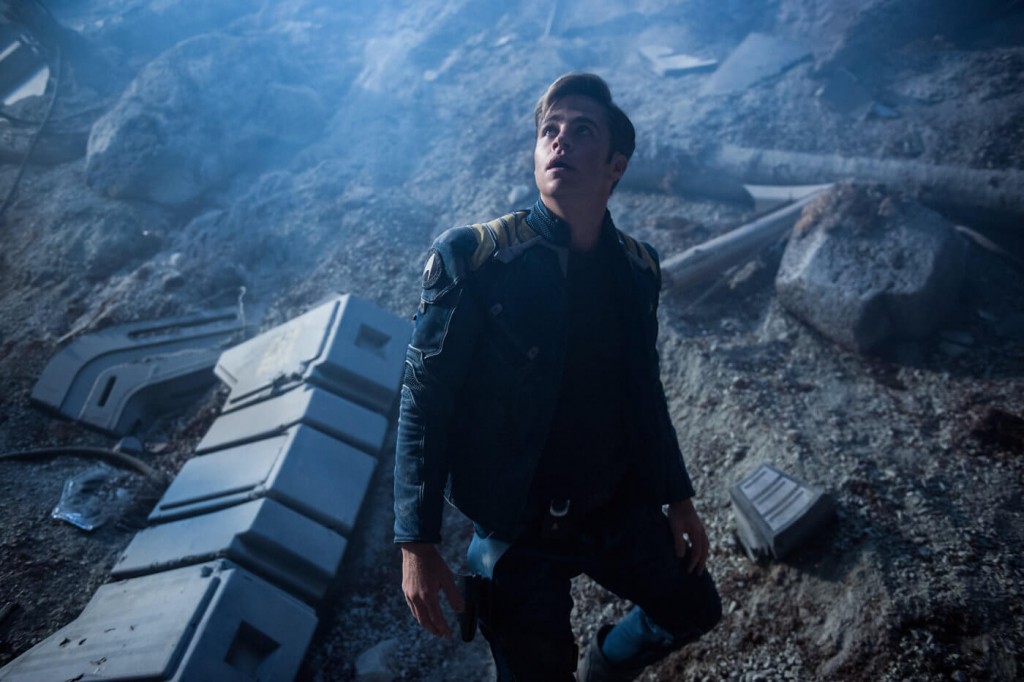 Star Trek Beyond warped into theaters on July 22 to largely positive reviews. The film is the third installment in the rebooted Star Trek universe, officially dubbed the “Kelvin Timeline” (though it’s popularly known as the “Abramsverse” after J. J. Abrams, who directed the first two films). Star Trek Beyond, however, was helmed by frequent Fast and Furious director Justin Lin, working from a script written by Doug Jung and Simon Pegg (who also plays Scotty).

Whether the change-up in director and writers is responsible or not, Star Trek Beyond does differ from its predecessors in at least one key respect: whereas the first two films focused on the gathering of the Enterprise crew and kept the action in close proximity to Federation worlds like Earth and Vulcan, Star Trek Beyond is truly set on the frontier. This distance from familiar space proves significant both in plot and theme, as the film is especially concerned about how its characters form meaning and identity when seemingly fixed points of reference have been removed.

Star Trek into Darkness probed at the nature of Starfleet — is it primarily a pragmatic military group or an organization founded on exploration? The Enterprise crew’s victory testified to the latter, and Star Trek Beyond accepts this exploratory nature as settled fact, even invoking events from the Federation history established in Star Trek: Enterprise in its support. Starfleet, as the venturing wing of the United Federation of Planets, is thus the movie’s emblem of unity-in-diversity, a philosophy that its villain (for very personal reasons) rejects.

The film begins half-way into the Enterprise’s five-year mission of exploration, and Captain James T. Kirk (Chris Pine) is lamenting the extent to which his ship’s voyages have become routine. After a brief stopover at the ultra-high-tech Starbase Yorktown, located on the fringes of Federation space, Kirk and the Enterprise are sent to rescue the crew of an alien captain who has sent out a distress call after her ship was attacked. Entering an uncharted nebula, the Enterprise crew gets more than they bargained for when a surprise attack leaves them separated and stranded on a barren planet, and at the mercy of a ferocious, enigmatic being who calls himself Krall (Idris Elba). In order to uncover Krall’s endgame, the crew must reunite and, with the help of a stranded alien named Jaylah (Sofia Boutella), defeat his massive armada of swarming ships.

By stressing spatial relativity and disorientation in space, the film demonstrates the need of a physics and metaphysics that incorporate relationship.

The rebooted Trek films have all been marked by their kinetic action, and unsurprisingly, Lin keeps his version fast and furious (though without the lens flares). But even more so than its predecessors, Star Trek Beyond is virtually defined by the disorientation it produces in the viewer. In a sense, the difference is even evident in the title prepositions. Star Trek into Darkness kept itself close to Earth most of the time, and was an exploration of the Federation’s heart (including its potential for darkness). While Star Trek Beyond is also deeply concerned about the Federation’s nature and history, it is (complementarily) about exploration, about traveling beyond past boundaries.

Shohreh Aghdashloo’s Commodore Paris points out quite early in the film that one can lose one’s sense of stability and identity in space exploration. According to her, Kirk’s ship and crew are his only reference points. But pretty quickly, Kirk loses his ship. And when Krall’s countless drone vessels pummel the Enterprise, forcing the crew to abandon her, Kirk — who has already been questioning his identity as a captain — is left with apparently nothing.

The attack sequence is one of countless scenes in Star Trek Beyond that evoke visual and spatial disorientation to good effect. Krall’s ships swirl in loops and spirals, a dark echo of the Escher-like convolutions of the Yorktown, whose design requires gravity to play some strange tricks. Jaylah survives in her harsh environment by employing an array of holographic illusions. Krall’s subterranean fortress twists in cyclopean, almost Lovecraftian ways, while the planet’s surface is dominated by vertiginous cliffs and alien architecture that looks like it came from the cover of an old-school 99¢ paperback.

But the film’s disorientation is multi-sensory, existing on the aural level as well. Garbled communication occurs throughout the film. Krall’s forces talk to one another in subtitled alien dialogue, while Lin emphasizes the universal translator’s difficulty in tracking with Kalara’s (Lydia Wilson) speech. When Krall and Jaylah communicate in direct English, they both use curiously inflected speech patterns. Star Trek Beyond’s incongruous use of Public Enemy and The Beastie Boys also supplements this disorientation, particularly in the latter’s case; their “Sabotage” not only featured in the first trailer but plays an important (and disorienting!) part in the film itself.

Past Trek iterations were characterized by a greater attention to scientific accuracy than most other contemporaneous sci-fi series, and one criticism that can readily be leveled at the new franchise is its outright dismissal of plausibility. But in one regard, Star Trek Beyond may be more astute than any of the hundreds of Trek installments predating it. As astronomers are increasingly discovering, space is vast, multi-dimensional, and perplexing. In Star Trek II, Spock notes that Khan’s strategy demonstrates “two-dimensional thinking,” but in reality, almost all episodes and films in Roddenberry’s imagined world have suffered from this tendency. In Star Trek Beyond, Justin Lin begins to visualize (and audibilize) the cosmos as physicists truly see it: incomprehensibly immense. Our own standard fixed reference points — the North and South Poles, the constellations, our planet and sun — are all careening through space.

Charting the universe in physical terms — trying to craft a truly stable cosmography — is thus an impossible task. Star Trek Beyond makes many nods to this fact, not only in its considerable visual and sound effects, but also in its many allusions to the concept of the “frontier.” Humanity and the Federation it has helped found embody a ceaseless wanderlust. When Krall tells Uhura, “This is where the frontier pushes back,” he is signaling a possible tension in the Federation’s vision of exploration. The film seeks to resolve this tension by shifting the locus away from physical frontiers as the stable sources of identity and toward a relational cosmography: it is through relationship (spatially and metaphysically) that we orient ourselves, rather than fixed points on a star chart.

While such space-time relativity in physics is by now uncontroversial, the film’s metaphysics of relativity, taken to an extreme, could be considered philosophically unhealthy for most Christians. Our faith unequivocally asserts a single God Whose character is, to a certain extent, knowable; Who communicated infallibly to us through a single document; and Who holds very real expectations for our conduct. On the metaphysical level, Christianity does insist on fixed points of reference. The Triune God is the immutable axis upon which our worldview turns, and all other relationships we experience must be mapped out accordingly.

Yet if we reject wholesale ontological relativism, we should nonetheless be able to affirm the importance of relationship — on both the vertical and horizontal levels — to our faith. Even the most basic forms of evangelical Christianity have maintained that it’s “a relationship, not a religion.” So we find our orientation in relation to Christ. But we then must find it in further relation to His Body the Church, and our brothers and sisters therein, as well as to the communities we serve in and testify to. There are no “lone wolf,” “churchless,” or “just spiritual” Christians in the New Testament understanding. Salvation is both personal and communal.

Key to a Christian understanding of relationship is Jesus’s maxim: “Greater love has no one than this, that someone lay down his life for his friends.” He declares this immediately after calling the disciples His friends. This, then, is the love that the Church has been tasked with incarnating. Yet if we are honest with ourselves, how often does our own network of church relationships really come close to attaining this standard? Star Trek Beyond lacks any solid religious foundation for its depiction of friendship; yet the crew of the Enterprise still provides us with a picture of self-abnegating relationship in action. They survive because they can depend on each other as stable referents, so Uhura can tell Krall with confidence, “Our captain will come for us.”

That confidence is certainly tested, however. Initially, it seems that Krall’s über-Darwinian naturalism, privileging survival in struggle and competition, could be vindicated. The Enterprise crew is dispersed across the planet, separated from one another. Yet, of course, they successfully reunite, using each other as their reference points. This film is free from the interpersonal conflict that characterized the other entrants in the reboot franchise, and it’s perhaps significant that this is the first film in the trilogy in which Kirk has no liaisons with any women — rather, his relationship with the men and women under his command takes center stage. Even with the physical space of the ship in pieces, its crew is able to stabilize in relationship to one another.

Simon Pegg has claimed that in writing Star Trek Beyond, he and Doug Jung “wanted to create a hybrid of an episode of The Original Series and a spectacular cinematic event.” Some past Trek films have been castigated for being too much like overlong episodes, including Star Trek: The Motion Picture and Star Trek: Insurrection (both of which Star Trek Beyond bears at least a passing resemblance to). But Star Trek Beyond does achieve the desired balance, and besides the arc of its plot, one of its most endearing features is its love for, and emphasis on, the collaboration of the big seven crewmembers. Indeed, in one sense, the film is like the Original Series episode we always wanted, in that each character provides distinctive contributions to save the day. This is especially emphasized in the final space battle outside the Yorktown, when the crew’s unity — each member distinctively and indispensably contributing — successfully destabilizes Krall’s mechanistic forces.

The end credits of Star Trek Beyond pay homage to its two deceased stars, Leonard Nimoy (the key connection to the Trek Prime universe) and Anton Yelchin (the actor who portrayed Ensign Chekov and was killed this summer in an automobile accident). At numerous points, the film makes nods to the original actors and characters that first made Star Trek so memorable. Justin Lin, Simon Pegg, and Doug Jung cleverly find a way to make the frenetic pace of a cinematic, big-budget Star Trek reinforce their key thematic concerns. By stressing spatial relativity and disorientation in space, they demonstrate the need of a physics and metaphysics that incorporate relationship. The Enterprise crew are not directly comparable to the Church, of course. But it may be worth asking why our own Christian relationships don’t look more like theirs. Because after all, we do have a stable reference point from which to build our community.