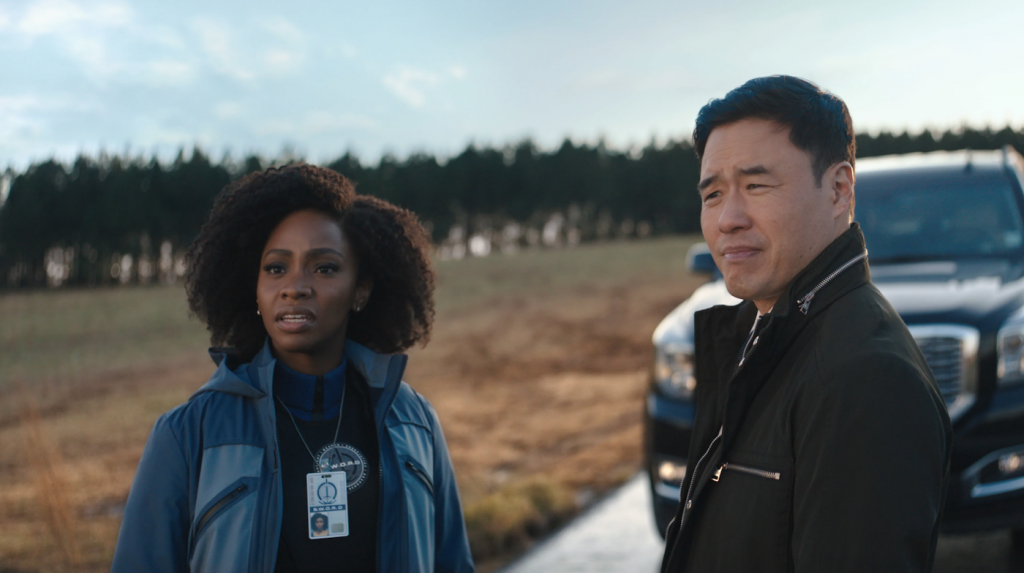 One of the less consequential cruelties of the year twenty-twenty was the absence of the Marvel Cinematic Universe to interrupt the misery of a terrible, horrible, no good, very bad year.

And yes, I realize someone reading this will tweet at me how the seventh season of Agents of S.H.I.E.L.D. aired during that period. Congrats to you and the twelve other people who watched it. Great job. Proud of you.

But for the rest of us, 2019’s Spider-Man: Far from Home was the last time we stepped foot in this universe. And for a fan community that’s been primed to expect up to three feature films every year, it’s been a long minute!

Nonetheless, WandaVision’s first three episodes didn’t quite scratch that itch. The show had been, up to that point, a cookie cutter interpretation of sitcoms from the 50s, 60s, and 70s, with occasional moments of surrealism dropped in. Good stuff, sure, but a far cry from the inter-connected MCU that we’ve grown to love.

But with episode 4 (“We Interrupt This Program”) Marvel Studios brought WandaVision to the other side of the sitcom screen, away from our living rooms and back to the “real” world of Hulks and Titans and Scarlet Witches that I mentioned last week. I felt that familiar pang again. It felt good.

This week we were back in the timeline of the MCU’s most iconic event: the Snap. Or the “Blip” as the inhabitants of this universe call it. And more specifically, the Blip back to reality, when the Avengers successfully pulled off their time heist.

Back when Bruce Banner un-Blipped every Blipped being back to their bereaved baes.

It’s a moment that was only alluded to in the aforementioned Spider-Man installment, and even then, it was a moment played for laughs.

This week’s episode takes us back to MCU’s most iconic event: Back when Bruce Banner un-Blipped every Blipped being back to their bereaved baes.

But WandaVision played it for horror, nearly as traumatic as the Blip itself, as the re-Blipped are confronted with the dreadful reality of having missed the last five years on earth. And in the case of Monica Rambeau, awakening to learn that her mother Maria (Captain Marvel’s BFF) had died during those same five years.

In quick succession, this episode confirmed things that we had only just begun to suspect. For instance, while last week showed us that Westview is an actual place on earth, now we know that Westview isn’t just any physical place. It’s an actual town in New Jersey. It’s on the dang map!

To be honest, the moment we learned this information was the same moment I started to suspect that WandaVision was changing protagonists. Before now, we’ve experienced WandaVision through the eyes of Wanda and Vision, with only hints of some outside, ominous observers taking stock of the events inside the boundary.

But now we know those observers are the men and women of S.W.O.R.D. And while we don’t yet know whether to trust S.W.O.R.D. as an entity, we can safely presume the overall good intentions from our new audience stand-ins, Jimmy Woo, Darcy Lewis, and Monica Rambeau.

After all, these three have the same questions we have. “What are we looking at here?” Woo asks. “An alternate reality? Time travel?” Exactly, Woo! Why is it shaped like a hexagon? WHAT IS HAPPENING!

Meanwhile, our relationship with Wanda is becoming more antagonistic. Case in point: we learned the inhabitants of Westview aren’t just figments or creations of Wanda’s making. Most of them are confirmed as real life missing persons—men and women ripped from their lives and placed within the confines of Wanda’s primetime reality.

Creepier still, for the first time we saw Vision as he actually is, just as he was at the end of Avengers: Infinity War, with the Mind Stone crudely ripped from his head, as the synthezoid’s lifeless body asks Wanda, “What’s wrong?” Just like the other inhabitants of Westview, Vision isn’t just a construct of Wanda’s making either. It’s actually him.

Only now, he’s a talking corpse. You can be forgiven for thinking this is some next-level Weekend at Bernie’s ish.

This is bad. It’s borderline deranged. And despite Wanda’s assurance to Vision, “I have everything under control,” I think it’s high time we start worrying about Wanda and what she’s capable of.

It’s nice to see the events of the MCU back on the ground in the eyes of innocent bystanders. At some point, after the events of Avengers: Age of Ultron, these films mostly stopped showing us their stakes in terms of real life men and women on the ground. This week’s opening sequence was a welcome course correction from that trend.

Also, I appreciate the perspective this episode gave on the broader connected universe, specifically about how people talked and thought about the Snap after the events of the Infinity War and Endgame.

For one, we learn that Maria Rambeau not only founded S.W.O.R.D., but she wrote contingencies for the possibility that everyone who was Blipped—including her daughter—would come back. Similarly, when Jimmy and Darcy are discussing Vision’s fate, Darcy recalls that Vision is dead. “Not blipped. Dead,” she says.

It suggests that people who were alive in those five years had some category for thinking the Blip wasn’t as permanent as death itself, a belief that was proven true the moment Professor Hulk un-Snapped the Snap. But it also means that after the events of Endgame, people didn’t think of the “Blipped” as people who were brought back from the dead. The Blip was a mass murder of sorts, but murder of a different kind.

Either way, this week’s episode was the kind of reveal that I thought would be teased until the very end. Now that so many of the “secrets” seem to be spilled, I really don’t know what to suspect next.

Is Wanda the villain now? Or is it someone else? Maybe it’s another Player at work, someone yet to be introduced, someone pulling Wanda’s strings.

Honestly? I hope it’s not. It’s okay if Wanda has gone dark. I would welcome the MCU introducing a hero who isn’t acting all that heroic, someone to root for who needs forgiveness. I often can’t relate to being a hero, but I can relate to that.