Silvia Moreno-Garcia has been publishing fiction for around a decade now, including half a dozen novels in the past five years. But her star rose significantly this summer with the widely touted release of her latest novel, Mexican Gothic. Since its publication four months ago, Mexican Gothic has sold well and earned its author widespread praise and numerous accolades. As its very title suggests, the novel is a hybrid of genres, fusing historical, literary, and cinematic motifs from her home country with the classic horror tropes of countless English-language Gothic texts. 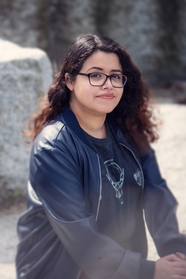 But Mexican Gothic’s narrative complexity exceeds even the duality indicated by its title. Moreno-Garcia reads deeply and broadly; indeed, her primary advice to aspiring writers is to “[r]ead everything—nonfiction, fiction, memoirs, novellas, pulp, obscure stuff, the canon and the obscure.” If her novel cannily plays with the expected fixtures of the Gothic mode, it also relies heavily on a distinct yet parallel genre: the fairy tale. To me, it is precisely with adroit balancing out of the weird Gothic and the fairy tale realms that makes Mexican Gothic such a fascinating read, drawing out the tensions between fear and hope that inhabit the liminal boundaries of both genres.

Mexican Gothic begins not in a fictive medieval past or the misty fens of Victorian sensation novels but in the boisterous and colorful world of 1950s Mexico City. The protagonist, Noemí Taboada, is a twenty-two-year-old socialite, who delights in casual flirtations with local boys but really wants to commence a graduate degree in anthropology. Her wealthy father reluctantly consents, with one vital caveat: Noemí must locate her cousin Catalina and confirm that she is safe. Catalina not long ago married Virgil Doyle, the dashing and mysterious scion of a transplanted British family that owned a now-defunct silver mine.

Thus it is that Noemí travels to High Place, the decaying Doyle estate. Here she finds Catalina in poor health, physically and mentally, though the cause of her lassitude and distress remain ambiguous. Noemí increasingly runs into difficulties during her stay at High Place as she seeks to navigate the complex family dynamics of the aggressive Virgil; his frail and casually racist father, Howard; and Howard’s imperious niece, Florence. She finds a possible ally in Florence’s wan son Francis, who incurs his mother’s wrath in assisting her. It will come as no surprise that High Place is an environment haunted by secrets, secrets that Noemí must uncover if she is ever to be of concrete help to her ailing cousin.

On the one hand, Mexican Gothic is, indeed, a Gothic novel—unabashedly, ostentatiously, gloriously so. I first learned of the book through Maureen Corrigan’s review at NPR, in which she draws attention to several female Gothic antecedents: Ann Radcliffe, Charlotte Brontë, Daphne Du Maurier. Such observations are well-founded; Moreno-Garcia even explicitly invokes Jane Eyre and Wuthering Heights. And other female Gothic texts also lurk at the margins, most obviously Charlotte Perkins Gilman’s classic, “The Yellow Wallpaper,” with its storyline of a woman trapped by medically minded men as she goes mad in a diseased mansion.

Moreno-Garcia’s characters can’t fully convince themselves that their world truly can be a fairy tale kingdom. But neither can they be satisfied with a universe that is nothing but a nexus of cosmic horror.But as soon as I heard Corrigan’s summary, I knew there was another major branch of literary horror antecedents that she hadn’t brought up: the weird fiction of H. P. Lovecraft and one of his own major forerunners, William Hope Hodgson. Moreno-Garcia has explicitly named Hodgson’s classic horror story “The Voice in the Night” as an influence and has even co-edited a horror anthology called Fungi, inspired by his work (fungi figure heavily in Mexican Gothic). She’s also co-edited an anthology of Lovecraftian stories, She Walks in Shadows (alternately titled Cthulhu’s Daughters), and has named Lovecraft as the writer she would most like to meet.

This doesn’t mean she is oblivious to the tensions inherent in Lovecraft’s work, his reputation made increasingly ambivalent from a growing discomfort at his well-known racism. Contemporary horror aficionados often wrestle with the implications of his beliefs, in texts like Victor LaValle’s The Ballad of Black Tom or Matt Ruff’s Lovecraft Country (now an acclaimed HBO series). As a woman of color herself, Moreno-Garcia frequently acknowledges Lovecraft’s complicated legacy; it’s hardly a coincidence that the eugenicist patriarch of her novel’s family has the same name as Lovecraft (Howard). Noemí holds her own against the oppressive whiteness of her ostensible hosts. As Corrigan’s review suggests, the inordinate power that predatory men may hold over women is a major site of fear in this horror, as in so many Gothic tales that precede it.

But Lovecraft remains beloved for a reason, and in his and Hodgson’s weird fiction there is a fear at once more philosophically existential and more visceral than the gendered fears of Radcliffe, Gilman, DuMaurier, and the Brontës. That is cosmic fear, the terror that humans exist alone in an uncaring or even downright hostile cosmos. This is a universal fear, one that may afflict anyone (at least, anyone living in our secular age); indeed, it is, I would contend, the logical response to a skeptical atheist worldview.

If Moreno-Garcia’s novel is most obviously concerned with the horrors inherent in male-female power dynamics, she indicates at various moments that she isn’t unaware of the force behind cosmic terror. A key motivator for certain characters derives from their desire to cheat death, a desire borne out of an unspoken dread at the implications of dying. No price becomes too high to pay in order to stave off the cessation of consciousness. Mexican Gothic’s use of fungi also taps into this fear. Throughout Hodgson’s corpus, fungi threaten to swallow up his characters, to rob them of their core human identity and transform them (as scholar Kelly Hurley has noted) into ab-human “Things.” If that horror helps motivate her villains, it also haunts her heroes—perhaps not articulated, but lurking in the shadows around them.

But horror stories aren’t the only tales about protagonists who must face their fears: that’s also true of fairy tales. As G. K. Chesterton observed (and Neil Gaiman has adapted), classic fairy tales affirm the potency of our fears but promise a hero to vanquish them. Noemí’s cousin is enamored of fairy tales, though this gets her in trouble. Just as her Gothic readings may have led her to look for a Rochester figure in Virgil Doyle, her love of fairy tales may lead her to see a prince’s palace in High Place. Most true märchen force their characters to undergo countless trials before their happily ever after, but Catalina seems to have been self-censoring that suffering and seeking to skip ahead to the “fairy tale ending.”

As a result, Mexican Gothic seems at times to be interrogating the fairy tale account of reality. Clearly, on some level, it has deceived Catalina. The more pragmatic Noemí, on the other hand, is able to remain (for the most part) lucid in the phantasmagoric environs of High Place—or at least to fight her way back to lucidity. Within her anthropological frame of mind, fairy tales are simply oral, traditional constructions, by-products of culture rather than repositories of wisdom.

And yet, despite Noemí’s skepticism, Mexican Gothic is hardly a straightforward repudiation of the fairy tale genre. If Catalina’s excessively rosy appropriation of fairy tale conventions blinds her to danger, the blinding is at least in part self-inflicted. She might crave love at first sight, as in Charles Perrault’s “Sleeping Beauty”; but from Perrault’s “Little Red Riding Hood” or “Bluebeard,” she might have learned that men are appetitive predators. Dark paths wind through dark woods in fairyland, a realm of tribulation and testing. If Gothic horror and fairy tale are distinct genres, they are also adjacent, even overlapping in certain liminal twilight spaces. And Mexican Gothic may be situated in such a space.

If Christian fairy tale expositors like Chesterton are correct, many fairy tales point (however obliquely or symbolically) to the triumph of the hero Christ and the wedding supper of the lamb. The prince and princess, living happily ever after, typologically foreshadow the eschaton. Contra modern “realism” that situates itself only in the mundane, unenchanted realm of our senses, fairy tales represent a greater, more transcendent realism. They telescope time and space to remind us that, for we who are Christ’s bride, this tragic world climaxes in a divine comedy.

Moreno-Garcia certainly never approaches any such triumph in her text. Often, the imagery and language might seem to subvert, even invert, such a reading. The Doyles cultivate their own blasphemous parodies of sacramental rituals, from a horrific wedding ceremony to any number of monstrous perversions of the Eucharist. A running refrain at High Place is the Latin text of John 1:14, “Et Verbum caro factum est”: “And the Word was made flesh.”

Yet this book is aptly titled Mexican Gothic, and folk wisdom and Catholic liturgy are both key features of Mexican identity. Noemí is at times able to receive strength from her church rituals, however habitual and underdeveloped they may be. And fairy tale allusions abound in the closing pages, comically appropriated at times yet suggestive of a more profound applicability. Moreno-Garcia evinces some hesitance about fully accepting the cosmic authenticity of such accounts, commenting at one point that “he needed a story and she needed to tell one, so she did until she didn’t care whether she was lying or speaking the truth” (300).

Moreno-Garcia’s characters can’t fully convince themselves that their world truly can be a fairy tale kingdom. But neither can they be satisfied with a universe that is nothing but a nexus of cosmic horror. The final existentialist moments, then, gesture toward a longing, a desperate wish that communal storytelling might create relationships by which we might buttress one another against the void. It is an inadequate response, but it could be the start of a fruitful journey. Fairyland is a dark, even horrible, place—but follow the path all the way through to its farthest verge, and you may spot a certain wedding feast, where the celebrants truly are living happily ever after.