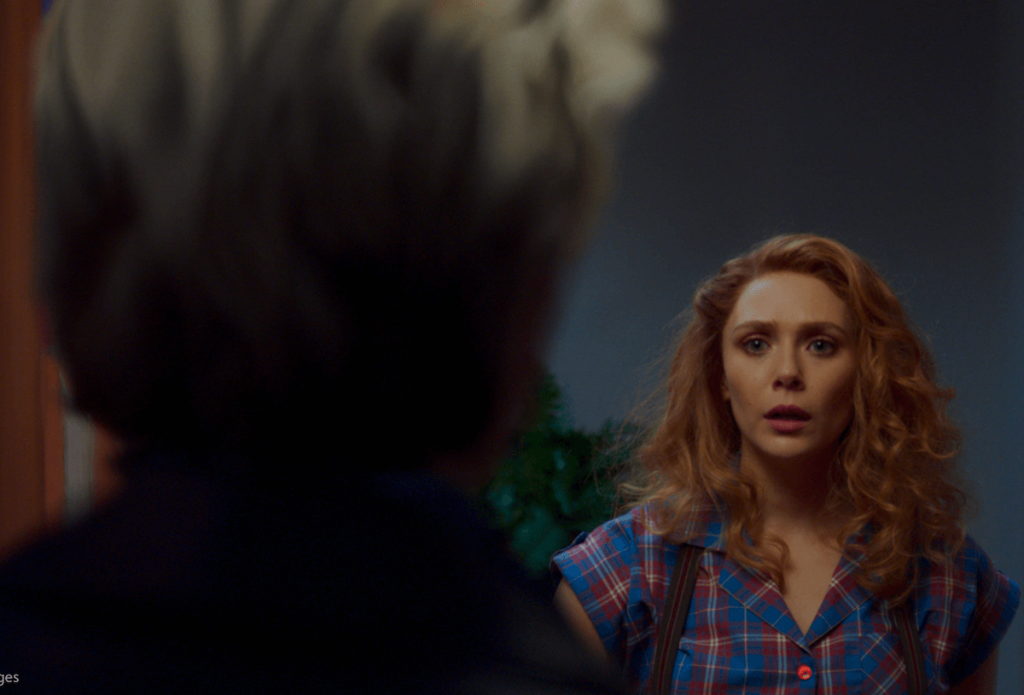 Now that we’ve wrapped episode 5 (“On a Very Special Episode…”), we’ve got some catching up to do. We’re officially halfway through WandaVision, and now’s a good time to take stock of where things stand.

We’ve considered whether the events of WandaVision, the setting of Westview, and the resurrection of Vision were all figments of Wanda’s making; that she had somehow sunk into a simulated existence, powered by her uncanny abilities as the Scarlet Witch.

But now we know WandaVision is deeper and darker than that. Westview is real. It’s a New Jersey town that’s been taken over by “The Maximoff Anomaly” or “The Hex” or whatever else we want to call it. The town and everyone in it—they’ve all been utterly consumed by it, devolved to a saccharine derivative of a make believe, small-screen suburbia.

If Wanda really is in control, then that means she’s more powerful than we’ve ever realized.

The people of Westview are unwitting pawns, controlled by the Hex’s effect on them. They are real life men and women whose unrelenting suffering has been masked and stifled by the charade.

Likewise, Vision is no figment either. Vision is dead. D.E.A.D. Dead. He is a corpse in plain clothing, albeit one with awareness and feelings and conductive reasoning.

But for reasons we don’t yet know, unlike the residents of Westview, Vision is fitting the pieces together now. And the more he learns, the more he dreads.

This week, for the first time ever, Vision snapped.

“What is outside of Westview?!” he demands of his wife, his flesh turning a deeper hue of burning red.

Wanda is aghast. “You’ve never talked to me like this before.”

“Before what! I can’t remember my life before Westview! I don’t know who I am!”

(Pass the tissues, please! Maybe synthezoids don’t cry, but I still do.)

Vision is right to be scared. As far as we know—or think we know—Wanda is responsible for the events of WandaVision. This is her show. She decides when the credits roll. She bends each episode toward her whim. And in those rare moments when things don’t go her way, Wanda resets the show. She gives it another take, until she finds the one she likes.

S.W.O.R.D. has taken an interest in the Maximoff Anomaly, and they’re actively attempting to infiltrate its perimeter, sending in drones and agents, with one agent in particular, Monica Rambeau, inadvertently becoming a character in WandaVision herself.

Monica, Jimmy, and Darcy are rooting for Wanda, interested in learning what’s driven her to this point, trying to understand why Wanda is doing this. Meanwhile, S.W.O.R.D. Director Tyler Hayward has branded Wanda a terrorist. And in this latest episode, the goon actually tried killing Wanda.

Wanda confronts Hayward and the rest of S.W.O.R.D. Butt out of Westview, she warns, “I have what I want. And no one will ever take it from me again.”

And yet, with this much season left to go, it’s a safe bet that things are still not quite as they seem.

I, for one, am beginning to think maybe it’s too easy to conclude that Wanda is the sole author and perfector of Westview. Case in point, our friends Jimmy, Darcy, and Monica speculate about the nature of matter and reality in Westview. If everything were under Wanda’s control, this means she’s displaying a level of power that rivals anything we’ve seen from her before. Can she really do that on her own? The answer is a resounding NO.

But if we’re wrong, if Wanda really is in control, then that means she’s more powerful than we’ve ever realized.

Either way, consider the following. Wanda is as baffled as the rest of us that in the course of just a few episodes, she’s carried an accelerated pregnancy to full term, giving birth to twins, Billy and Tommy. Further still, as her infants fuss and scream, the Scarlet Witch is bewildered. Why can’t she make them stop? Likewise, when the twins age in intervals of five years, Wanda is powerless. She resorts to pleading with them not to age again.

On some level, Wanda herself doesn’t believe she’s controlling Westview, at least, not completely. She asks Vision the rhetorical question, “Do you really think that I am controlling everything?” She knows the answer she expects.

No, of course not. That would be silly.

At best, she believes it. At worst, she’s straight up lying to Vision and self-deluded to the point of believing her own lies.

Yet when Wanda finally confesses, “I don’t know how any of this started in the first place,” I’m convinced it’s the most honest, pure distillation we’ve seen of her yet. In a phony world, this is Wanda finally getting real.

But someone desperately didn’t want Wanda to complete that thought. At the exact moment she was on the brink of grappling with the consequences of her actions, someone reset the scene. But this time, it wasn’t Wanda controlling it.

The doorbell rang, and in stepped Wanda’s long-dead brother, Pietro.

In with the Quicksilver. Out with the bad feelings. And like that, Wanda forgot what she was about to say.

Referring to Wanda, last week I wrote, “I would welcome the MCU introducing a hero who isn’t acting all that heroic, someone to root for who needs forgiveness.”

My wife reminded me that the MCU already introduced a character who went dark, someone whose grief spiraled out of control until he became a villain.

After his family was Blipped, Clint Barton did bad things to bad people, until he very nearly became a bad person himself. It seems no coincidence that at the end of Avengers: Endgame, when the rest of the world mourned the loss of Tony Stark, Clint and Wanda stood together, mourning the loss of Natasha and Vision.

The difference is, when Clint lost Natasha, the bittersweet consolation was his family coming back from the Blip.

When Wanda lost Vision, she lost it all.

We saw security footage showing Wanda stealing Vision’s body from S.W.O.R.D. before taking him to Westview. Director Hayward opines that Vision never wanted his body to be used as a weapon.

Here’s another prediction (again, compliments of Mrs. Poppe’s keen eye): S.W.O.R.D. was doing to Vision’s body the same thing they’re now accusing Wanda of doing. Just as S.H.I.E.L.D. weaponed the Tesseract all the way back in the first Avengers film, S.W.O.R.D. had misguided intentions with Vision’s vibranium-rich remains as well.

I’ve gone this whole article without mentioning this week’s biggest moment. When Pietro rang the doorbell, we saw the X-Men franchise’s version of Pietro, the one from 2014’s X-Men: Days Of Future Past, and not the one from 2015’s Avengers: Age of Ultron.

I know it’s confusing, but stay with me. These are two Marvel franchises that before now were completely separate from one another. They both featured different versions of Quicksilver as a result of weird, complicated licensing agreements between Marvel and Fox.

But notice, when Darcy exclaims, “She recast Pietro??!” she’s speaking from the perspective of the Marvel Cinematic Universe. She’s never seen this man before.

But we the audience have. And interestingly, Wanda recognizes him too.

This could mean one of two things.

The show could be messing with us, and the Pietro we’re seeing isn’t actually Pietro, but a manifestation of a very bad villain who’s pulling Wanda’s strings and getting her to forget all the worries that Vision had just placed in her head a moment before.

If it’s not that, then this is one of the more consequential shifts in the history of the MCU, the bridge by which Disney—having reacquired the rights to Fox’s Marvel properties—will finally introduce X-Men, Deadpool, and the Fantastic 4 into their sprawling—and far superior—cinematic universe.

I speculated a few weeks ago, “[It] seems WandaVision won’t just be a throwaway experiment in the MCU, but rather a foundation upon which the next several years of Marvel’s Phase 4 will be built.”

The good news is, hooray for me! I was right! I’ll ride that high as far as I can take it.

The bad news is, if you’re someone who loves WandaVision, but isn’t up to date on the MCU, it looks like you have another Marvel franchise to add to your watchlist now.

Like I said. We’ve got some catching up to do.