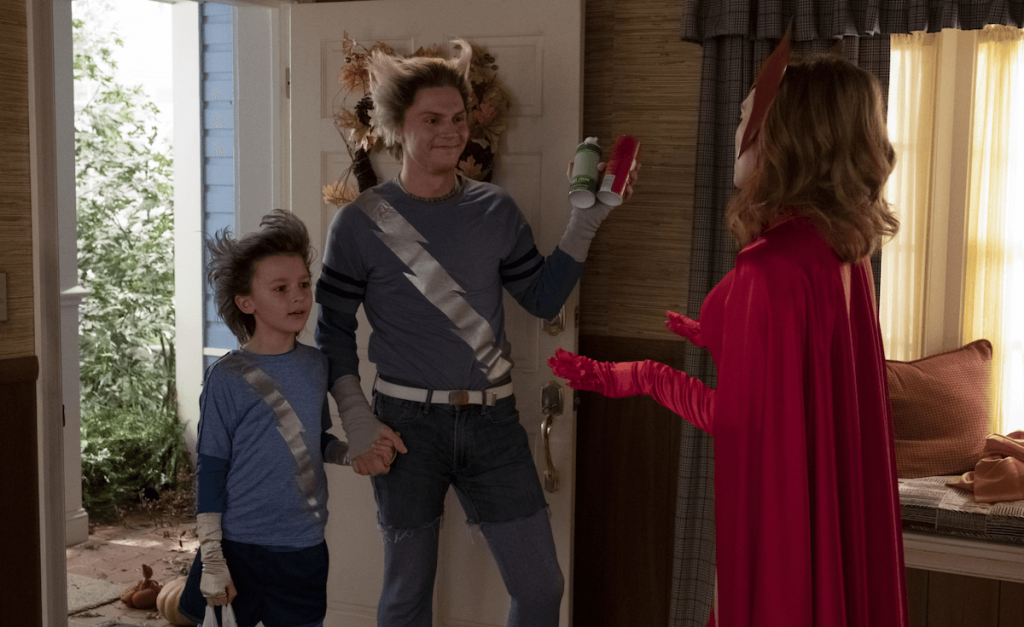 Before we talk about what happened in the latest WandaVision episode, let’s revisit the closing minutes of the prior week. As you recall, Vision lost his cool and appealed to Wanda’s conscience. “What you’re doing is wrong!” he told her.

The fight brought Wanda to the edge of herself, until she confessed, “I don’t know how any of this started in the first place.” As an audience, it was our first sense that while Wanda has some (or even most) control of Westview, she has no memory of its creation nor how she got there. We were left to conclude that maybe Wanda isn’t as omnipotent as we thought, that perhaps Westview had captured Wanda too; a hostage to a yet-to-be-revealed villain.

I wrote that Pietro’s unexpected appearance was too convenient. The doorbell’s timing ensured that the seed of doubt Vision planted in Wanda’s mind vanished at the sight of her long-dead brother. Problem solved.

I bring this up because it’s crucial for understanding what happened in the final minutes of this week’s episode, “All-New Halloween Spectacular!”

As Wanda and Pietro take Billy and Tommy trick-or-treating, the Sokovian siblings steal a moment to appreciate Westview’s festive downtown—a city square brimming with costumed families milling about. Then, seemingly out of the blue, Pietro breaks the fourth wall and asks Wanda where she’s been hiding all the neighborhood kids in the prior episodes of WandaVision.

Pietro doesn’t mind if he leads Wanda back to the moral question of Westview, so long as she never acts on it.

Wanda is shaken by the cue, but Pietro doesn’t miss a beat. He wonders if she’s been keeping the children asleep in their beds this whole time, so as not to “traumatize” them. (The implication, of course, being that Westview is, in fact, traumatizing everyone else living inside it.)

Pietro praises Wanda for how she kept all the couples together and how “most personalities aren’t far off from what’s underneath.” And just as Jimmy, Darcy, and Monica have observed how the Hex demonstrates Wanda harnessing a level of power she’s never shown before, Pietro tells Wanda the same thing. “It’s a pretty big leap from giving people nightmares and shooting red wiggly-woos out of your hands.”

“What are you kidding?” he smirks. “I’m impressed!”

Unlike Vision—who had Wanda questioning the morality of her actions—Pietro compliments her.

And then Pietro brings Wanda back to the same painful question that interrupted our programming last week: “How’d you do all this?”

I have to admit, this moment confused me. If Pietro’s surprise entrance was originally intended to prevent Wanda from thinking about Westview’s origins, why is he now raising the subject again?

I have a theory.

Pietro doesn’t mind if he leads Wanda back to the moral question of Westview, so long as she never acts on it.

Consider how C. S. Lewis speaks of repentance in The Screwtape Letters, a fictionalized collection of correspondence in which the demon Screwtape instructs his under-demon nephew how to tempt a man who’s begun the work of sanctification:

Wanda’s nemesis isn’t that different from our own. Lingering thoughts of repentance are of no real consequence in and of themselves. Properly manipulated, this can be to the enemy’s advantage when repentance is prohibited from conceiving a change of heart or behavior.

Remember what Paul wrote in 2 Corinthians. “[Godly] grief produces a repentance that leads to salvation without regret, but worldly grief produces death.”

Repeated a hundred times over, a wounded conscience devoid of action produces a death spiral. Eventually the bad feeling’s moral imperative flees away. In time, Wanda will no longer feel guilty about Westview.

In fact, she’ll no longer feel anything at all.

A few thoughts as we close.

I tweeted a couple weeks ago that WandaVision’s Hex reminded me of the “Shimmer” from the film Annihilation. If you’ve never seen it, the Shimmer genetically alters all living things inside of it. As a result, most people inside the Shimmer lose their minds, while animals and plants morph into eerily beautiful new creations and cancerous abominations.

Apparently the Shimmer analogy was better than I realized. Darcy warns Monica against entering the Hex again. As the only person who has entered and exited the Hex, Darcy tells her, “The energy inside has rewritten your cells on a molecular level twice. It’s changing you.”

Darcy is most certainly alluding to Monica Rambeau’s eventual transformation into a full-blown superhero with actual superpowers. The Hex seems like the stuff origin stories are made of.

And while this may be a stretch, Darcy could also be foreshadowing the eventual introduction of Mutants to the Marvel Cinematic Universe. If the Hex is changing the DNA of everyone inside it, it’s not a far off thought to think this could be the way we’ll see more Mutants joining the MCU.

Circling back to Pietro, I am undecided if the person we’re seeing really is Quicksilver, or if he’s someone bad taking the form of Quicksilver. I’m leaning toward the “someone bad” theory.

The twins introduce this episode by saying, “Halloween is a magical holiday all about family, friends, and the thrill of getting to be someone else for a day.” It fits the theme that the person Wanda thinks is Pietro isn’t actually Pietro.

Later, when Uncle Pietro is taking the kids trick-or-treating, he tells them, “Unleash hell, Demon Spawn!” While I’ve yet to say it explicitly in these weekly recaps, it feels irresponsible to keep writing around it. Lots and lots of people are speculating that WandaVision’s ultimate villain will be revealed as Mephisto, a powerful, extra-dimensional demon from the Marvel comics. If they’re right, then Billy and Tommy are quite literally “Demon Spawn,” and Quicksilver knows it. It also makes my Screwtape Letters reference less subtext and more text-text.

Just about every week we’ve talked about WandaVision as a show that’s all about Wanda’s grief. With that in mind, Pietro’s own description of his surprise arrival seems relevant: “I come to town unexpectedly, create tension with the brother-in-law, stir up trouble with the rugrats, and ultimately give you grief.” Could it be that Wanda’s villain just spilled the plot by concealing his master plan in the punchline of a Malcolm in the Middle-esque Halloween special?

Speaking of, whether it’s Wanda controlling Westview, or Hayward controlling Monica, or Mephisto controlling Wanda, this show is all people exerting their power over each other. In that case, is there a more perfect 90s theme song than the one from Malcolm in the Middle?

♫ YOU’RE NOT THE BOSS OF ME NOW

AND YOU’RE NOT SO BIG