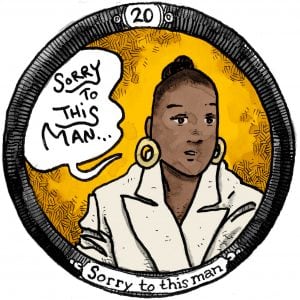 “The world is changing, and some of the ideas that were popular and useful in their time, like the Motorola two-way pager, are obsolete.”

Actress and TV host Keke Palmer did an interview with Vanity Fair to help promote her movie Hustlers. As part of the interview, she was hooked up to a lie detector test and asked a number of questions about herself, her career, and pop culture. At one point, the interviewer shows Keke a photograph of former vice president Dick Cheney. Keke responded that she hoped she did not sound ridiculous but she did not know who the man in the photograph was and hilariously concluded with “sorry to this man.”

With those four words, a meme was born. In Keke’s defense, she was in grade school when Vice President Cheney and his boss, President George W. Bush, were elected. The “Sorry to this man” meme is funny partly because of its earnestness and partly because it’s slightly bewildering that one of the formerly most powerful men in the world was now unknown.

The meme was a perfect metaphor for the generational divide also represented by “ok boomer.” The expectation that future generations will celebrate and value the things we value today is an idea grounded in hubris. The world is changing, and some of the ideas that were popular and useful in their time, like the Motorola two-way pager, are obsolete. It is okay to say “sorry to this man” to man-made methods that no longer serve our purposes. Frequently, the reaction to the generational shifts is to degrade and demean the differences. But we can honor the past yet not be tied to the same old ways of doing things.

“Sorry to this man” reminds us that notoriety is fleeting, that no one culture or person will be celebrated or remembered forever. More than personal achievement we should seek first the kingdom of God, because his name is the only name that will outlast them all. —Kathryn Freeman 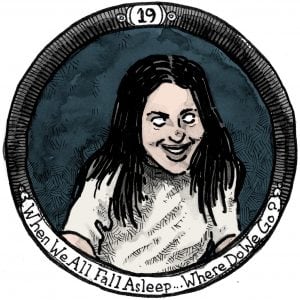 When We All Fall Asleep… Where Do We Go? by Billie Eilish

“Tyler Burns says it best: She has the bops.”

If you don’t know Billie Eilish, you’ll want to remedy that ASAP. This 17-year-old musician/dancer sensation released her first album in 2019 to critical acclaim. The eclectic collection of songs included on When We All Fall Asleep, Where Do We Go? blends styles from pop, EDM, industrial, trap, and even jazz. Tyler Burns says it best: She has the bops.

What places Eilish on our 25 for 2019 is the way her music serves to deliver her often-whispered lyrics, uniquely voicing the anxieties of her generation—and the human heart of every age. Listening to her work is a deep dive into all that’s wrong in the world. But by listening and singing along, we name the troubles together and find we are less alone. —Erin Straza 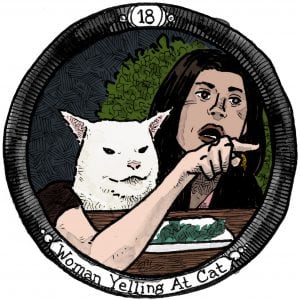 “It’s the smug expression, in fact, that makes it so funny and so memorable.”

I admit that, when it started popping up in my timeline, it took me a while to figure out what it was and where it came from. The meme that consists of two pictures—one of a woman yelling through tears, the other of a white cat sitting at a table and seemingly looking back at her, unfazed—was suddenly everywhere I looked, with a variety of captions. (“Girls when they see a spider. The spider.” “YOU SAID I WAS THE GIRL OF YOUR DREAMS. I woke up.”)

I finally had to go digging for its history. Like so many of the best memes, it arose from a moment of casual inspiration—the juxtaposition of a tense moment on The Real Housewives of Beverly Hills with a popular cat photo from Tumblr. And the rest is history.

Know Your Meme declares that the cat is “confused-looking,” but I’ve never seen it that way. This cat, if you ask me, is the opposite of confused. The word smug would not be out of place in describing this cat. It’s the smug expression, in fact, that makes it so funny and so memorable. For any of us who have ever spent too much time being moody or sensitive or overwrought—in short, for any of us who spend too much time wrangling with each other on the Internet—the smug cat is there to take the wind out of our sails, to remind us to chill out. I like to think that the online world is just a little bit healthier with that cat there telling us to get over ourselves. —Gina Dalfonzo 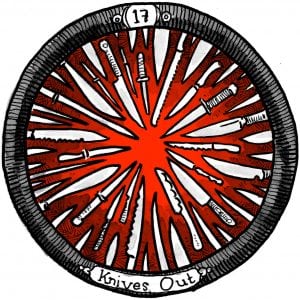 “It touches on thorny topics like current politics, wealth and social class, and immigration with a sly deftness.”

When Harlan Thrombey commits suicide after his 85th birthday party, his family is obviously shocked and saddened. But once famed detective Benoit Blanc begins investigating the suicide—and the Thrombey family—in his unorthodox manner, suspicions arise that Mr. Thrombey was actually murdered. What follows is an intricate, hilarious, and thought-provoking take on classic murder mystery whodunits from writer/director Rian Johnson. Intricate because the movie frequently loops back on itself, containing twists via flashbacks and misdirection that force you to re-evaluate everything you think you’ve seen. Hilarious because that intricacy never comes at the expense of a good time; Knives Out is top-shelf Hollywood entertainment helped by a star-studded cast (e.g., Daniel Craig, Chris Evans, Jamie Lee Curtis, Michael Shannon) who are clearly having a blast with Johnson’s story. And thought-provoking because Knives Out doesn’t ask viewers to turn off their brains. Instead, it touches on thorny topics like current politics, wealth and social class, and immigration with a sly deftness. Most importantly, Knives Out uses all of the above to tell a deeply moral story, one that affirms that kindness, selflessness, and grace always triumph over greed, cruelty, and selfishness. —Jason Morehead 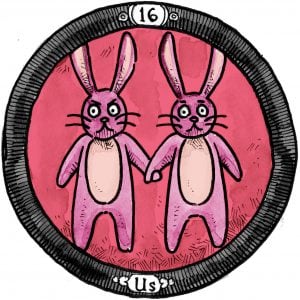 “It has the power to quicken our spirits to the righteous aims of God’s justice.”

Jordan Peele’s horror film Us is about a family, the Wilsons who are haunted by a monster-ish version of themselves while on vacation in Santa Cruz, California. But that’s not all it’s about. Us is filled with layered themes of social mobility, comparative economic philosophies, and equity that critique who we are as a nation and people, and from where we’ve come.

The most real and dynamic perspective from my viewing is the spiritual reality of God’s judgment on “Us”—the title working as a double entendre for both the U.S. and me and you (Americans). As the Wilson family seeks to survive by killing their respective doppelgängers, we see traces of a potential outcome for ourselves, how God may reverse America’s self-attained “blessings” by using our self-indulgent aspirations to become our own undoing.

As with any great horror film, Us has a tantalizing twist at the end that leaves you second-guessing everything you just watched. This makes it a great choice entertainment wise. But to move the needle beyond the trivialities of what happened and what meant what, the film becomes more mind-bending and introspective, especially as we ask the deeper questions of who we are and what that means in relation to God’s judgment on us and our nation. And this makes Us a great choice spiritually, as it has the power to quicken our spirits to the righteous aims of God’s justice. The Wilsons had to kill off what was killing them, thereby challenging us to do likewise. —Timothy Thomas

So You Just Found Out You’re in a Cult: A Socratic Dialogue