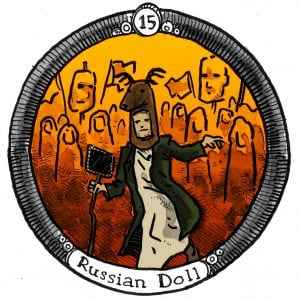 
“It is fun to watch, especially if you enjoy your humor a little more on the darker and more existential side.”

It’s easy to compare Netflix’s Russian Doll to the Bill Murray classic Groundhog Day. In both films, the protagonist keeps reliving the same day over and over again, and in the process, begins to grow and mature as a human being. But there are some subtle differences that make Russian Doll its own thing as well as one of Netflix’s more intriguing original series.

For starters, Russian Doll‘s protagonist—a hipster software developer named Nadia (played by Natasha Lyonne, who also created and produced the series)—keeps reliving her 36th birthday by dying in the most ignominious and shocking ways (e.g., falling down a staircase, gas explosion, crushed by a falling air conditioner). Second, Nadia’s not alone in her death-to-death cycle. A neurotic young man named Alan, who is in many ways Nadia’s complete opposite, is also stuck in a similar cycle. And finally, and perhaps most importantly, their deaths—or perhaps more accurately, their lack of living in an honest and compassionate manner—affects the rest world, which seems to fall into disarray and chaos the longer that Nadia and Alan are stuck in their cycle.

Part of the fun of watching Russian Doll—and make no mistake, it is fun to watch, especially if you enjoy your humor a little more on the darker and more existential side—is seeing how the series loops back on itself, revealing all of the ways in which its characters’ lives are intertwined. In doing so, it reminds us that our lives are not our own. Rather, we affect and impact each other in subtle and incomprehensible ways every day. We can either choose to live selfishly, seeking to control everything about us, or we can choose to live with grace, understanding, and compassion (even for ourselves). Our lives, and the choices we make with them, matter. —Jason Morehead 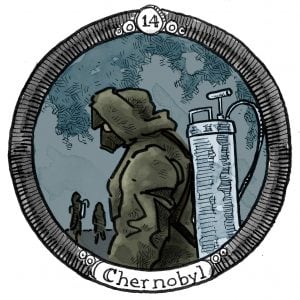 
“Chernobyl exposes the words as the comforting lies they are.”

An insidious half-truth occasionally finds its way into popular interpretations of the Bible story of the Great Flood. With the floodwaters receding and Noah’s family safely on dry ground again, God makes a promise. He spreads a rainbow across the heavens and tells Noah that it is a sign of his commitment never again to visit a cataclysm upon his creation. This is good news—hope distilled to its purest essence. It’s only too easy to twist that hope into hubris: God has promised he will not destroy us; therefore, we cannot be destroyed.

The HBO miniseries Chernobyl finds that hubris in spades in its recounting of the 1986 nuclear meltdown that came within a whisker of rendering a gigantic chunk of Asia uninhabitable. Methodically, the series walks us through the disaster in all its absurdity and horror. Gray-faced bureaucrats deny the evidence of their own senses because of their religious devotion to Soviet ideals. Officials who propose solutions to problems are punished for their pessimism. Innocent townspeople linger outside in the radioactive fallout to watch the prismatic light show as the nuclear reactor down the road burns. Everything will turn out right in the end.

The Year of Our Lord 2019 was a time of climate crises and natural disasters, malfunctioning bureaucracies and institutional cruelty, lying governments and alternative facts. These phenomena seemed to persist out of sheer inertia: It’s not great, but what are you gonna do? We’ll pump the brakes before going over the edge. We always do. In putting such sentiments in the mouths of people who very nearly precipitated a miniature cataclysm all on their own, Chernobyl exposes the words as the comforting lies they are. In its grim, irradiated world, the truth may or may not set us free, but falsehood is guaranteed to destroy us. —Kevin McLenithan 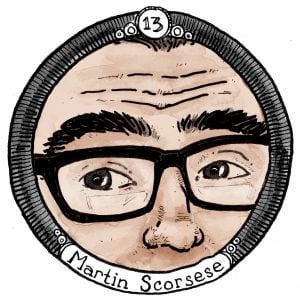 
“His piece—winsome, principled, passionate—is an exemplar of how to think and talk well about art.”

Where were you during the Scorsese/Marvel wars of 2019? If you were anywhere near social media, you knew about it. Martin Scorsese, legendary director and cinephile, was asked in an interview for his opinion on the superhero industrial complex that had just completed its victory lap with Avengers: Endgame. Perhaps predictably, Scorsese said he didn’t care for superhero movies: too much like theme park rides, too little like the sophisticated, psychologically rich films of masters like Bergman and Bresson, was his response. Perhaps even more predictably, Marvel fans erupted in outrage over Scorsese’s perceived elitism. What gave him the right to say that the cinema of Disney/Marvel wasn’t “actually” cinema?

The resulting online fracas between Scorsese’s detractors and defenders lasted for months. It was the most sustained and widespread discussion about art that the pop-culture landscape had seen all year. If catalyzing this conversation was all Scorsese had done, he would probably still belong on this list. Spurring people to think about and carefully articulate their own personal aesthetics regarding popular entertainment is hard to pull off in the age of Netflix binges and Rotten Tomatoes scores, after all. It was Scorsese’s next choice, though, that cemented his spot here at #13.

Confronted with vitriol of an intensity that only large groups of aggrieved nerds can conjure, Scorsese could have made the choice that so many others in his position have made: double down, get defensive, and impugn the intellect and good faith of anyone who disagreed with him. Instead, he wrote an article offering a detailed, thoughtful explanation of his perspective. His words weren’t those of a churlish, snarky gatekeeper but of an enthusiast whose affection for his art form shone in every sentence. Reading the article, you might still disagree with Scorsese, but you couldn’t doubt that he was a lover, not a hater. His piece—winsome, principled, passionate—is an exemplar of how to think and talk well about art. Be like Marty. —Kevin McLenithan 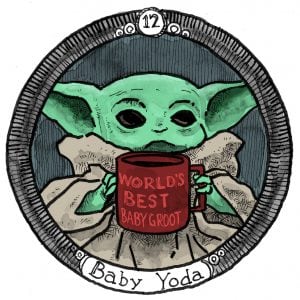 
“We love this little green guy—this foundling—to the end of our beings, with a love that can’t be explained.”

I love this anecdote from the set of Disney+’s The Mandalorian series. The story goes that famed filmmaker and actor Werner Herzog, who plays the Imperial “Client,” had just performed a scene with the Baby Yoda puppet when executive producer Dave Filoni informed him they would film it again without the puppet. The extra shot was a precautionary measure. If the footage of Baby Yoda’s physical, on-set performance didn’t work, Filoni explained, they would replace the character with a CGI creation.

Herzog would have none of it. “You are cowards,” he hissed. “Leave it.”

Why do I love that story? I suppose it’s because I can easily picture the rebuke delivered in Herzog’s trademark, Germaic scorn. But it’s also because it epitomizes everything we’ve come to understand about Baby Yoda from his eight-episode arc in The Mandalorian’s first season.

Baby Yoda is important. We must protect Baby Yoda at all costs.

We still know so little about Baby Yoda! Where did he come from? Why he’s so gosh darn important? What’s his gosh darn species?

Guys. We don’t even know his actual name.

Whatever, whoever (whyever?) he is, we love this little green guy—this foundling—to the end of our beings, with a love that can’t be explained. We will meme him, GIF him, and Etsy him, and there’s nothing Disney can do to stop us.

This is the way. —Matt Poppe 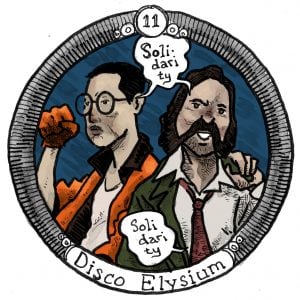 Disco Elysium is a stylistically gorgeous text-heavy game that has you, an amnesiac detective with serious mental issues, constantly arguing with, inquiring of, and hanging out with aspects of your own personality. (Also with inanimate objects, such as that necktie that almost killed you.)

Apart from all the other things that make Disco Elysium a cream-of-the-crop game experience (things like a wildly unique stats system, an absurd sense of humour, and a daring narrative panache), for me the shining crystal of its greatness is in something you have the opportunity to do. You can, if you wish, earn the friendship and respect of a detective sent from another precinct to help you solve your case.

Look. You are a disaster of a cop, a disaster of a human, and this guy is stuck with you. He knows you have a reputation for closing impossible cases, but he finds you raving and haunted—a detective with no memory, no badge, and no gun. And throughout the game, you have the option to win him over, to become his friend. And honestly, some of those moments where we grew closer, where we shared in simple human camaraderie? Those moments were as exciting to me as when I first saw that bit from Planet Earth 2 where the baby iguana is racing across the sands to escape 30–50 feral snakes. I was sitting there, laughing and clapping my hands like an idiot because of how much I had invested in this character and his approval. You don’t have to make friends with Lt. Kim Kitsuragi. You don’t have to win his admiration. You don’t have to stand up for him against the onslaught of bigotry he faces daily. But holy cats I wanted to—not because it’s necessary to finish the game—but because me and Kim? We’re friends, partners, a part of each other’s lives. What a thing to experience in the scope of a videogame. —Seth T. Hahne